30 posts of truth... 8.Someone who made your life hell, or treated you like shit.

My twin sister, but anyone who's been reading these blog posts probably could have guessed my answer. She was controlling, manipulative, and betrayed my trust. She refused to work through our issues, which I don't go into because they make me look foolish. I'm sorry, the purpose of this exercise is to help me open up, but when it comes to this, it's just too humiliating I guess. But hey, I answered honestly so I get brownie points for that right? :)
Continue

A long time ago (precomputer) days a friend sent me a mess of info on woods and their properties .I have no idea who to credit the info to originally but its not mine ,its just good solid information:)

Also called the Mountain Ash, and Quickbeam for its powers of bestowing and enhancing life, Rowan is sacred to Capricorn. It especially bears the power of the Dark Goddess, the Crone aspect of Mother Earth, and through her the…


Hands tied behind my back.
My will, surpressed.
You know I try to act
as if I cut you no slack.
But you hold the keys,
you always knew, you
were playing me like a fiddle
as i played you, fool.
No one listening,
you're all asleep.
Watch me as I walk
into the deep.
Scream at me, get it OUT.
What is all your
animosity about?
Burning the candle at
both ends.
We arent trying to make amends.
Just coping with… Continue

I wake up on a Monday morning, get up, do my morning ablutions and pray to great Anpu/Anubis. Throughout the day I feel kind of groggy, I'm not really in the mood to restart my freaking fitness routine but I feel pretty into mixing magic.
What to do.. What to do?
Throughout the day I carry on preparing for my later ritual of the evening. Poor Caramel has to be put down. He was an old rat and in much pain. I light my candles to Hekate and Anpu and…
Continue

This is one of a few older Yule posts I did on other sites ,I hauled them out of the closet for those of you who are my new friends and might want to peruse them ,for you who read them last year I'll be posting new things also :)


This is for those of you who are searching for… Continue

These are very easy yule projects that anyone can do:) I hope you enjoy it and I'd like to see pics of your yule crafts ! :) 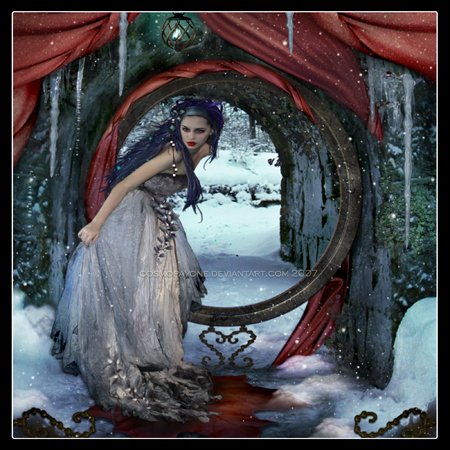 Now is the time of year that we turn our attention…

Lets Get Crafty ....A Witchy Wreath Of Protection

Welcome my lovelies !I recently completed a huge protection ward /witches wreath for a friend .This offered up the ideal opportunity for me to share some of the how to of crafting a ward of protection.First off she had her own wreath form she wanted used. Although very nice it was too flimsy to weave the center or support what was going to go on it ,I solved this by tying in a smaller sturdier wreath to the center ,thus creating a stable palet to add to.Before tying the smaller wreath to the… Continue

There is something strange that comes over me in Circle. I can feel it, magnetic in pull, a longing that isn't mine, but that is mine to express.

The Land around me hungers, and looks ever skyward, toward Her.

And in return, the Heavens gaze down, and there is longing in that gaze.

To me, in my time in the Circle, this is what I have discovered. Our gods are strange, in the accord of other IndoEuropean-descended gods, who are usually gods of the sky, and goddesses of… Continue

The Book of Coming Forth by Day

To Begin...
The Book of Coming Forth by Day, named the Book of the Dead by Egyptologists, describes the existence of the soul in the intermediate realm between Ta (the world below) and Nut (the world above). This realm is described as Dwat (the world in between) which can be found similarly in other religions as the netherworld, limbo,… Continue

30 Posts of Truth 7. Someone who has made your life worth living.

I'll just go ahead and say up front that my answer to this is going to be totally unoriginal. I know, almost everyone is going to list their S.O., but that's the reason they're our S.O.! I've been married to the love of my life for 11 years, 12 in December. It definitely hasn't been all rainbows and butterflies, but in my opinion, perfection is overrated! They say every relationship has it's ups and downs (whoever this They is seems to have something to say about everything!). I think every… Continue

Paganism is impregnated with myth, from greek to norse to egyptian. Almost every pagan you meet is at least familiar with one or two. However, I've noticed that a lot do not seem to know what to do with them. What is the point of mythology? Too often I see people taking mythology literally. Someone who believed that "orbs" were the souls of people who did not have the money to pay Charon for passage comes to mind.


One of my favorite quotes:

Looking Through - Page One

The Crucifixion Complex in Modern Paganism

As of late I have been working a lot, so if this seems really lame/what are you saying/huh-like, then I apologize, but yet again tool-age on another site has lead me to type up this little diddy (no, not P-diddy), so here we go.

It seems that being a solitary to many is just another way of saying "I have no clue about Wicca/Paganism/Heathenism, so give me all your knowledge" kinda look, but as a solitary who has done their homework, I can only begin to tell you how much it kills me to… Continue

Just wanted to put this out there before I head to bed.
I am an Eclectic Solitary with interests running the gamut from Druidry to WitchCraft to Heathenism and even authentic Native American Paganism if possible. (attempting to get in touch with all aspects of my blood history in one fell swoop! Half German, Irish, Italian and some Cherokee)
I am seeking any books that are 201 varieties. (Thank you Lady Morgen and others in the chat for your suggestions!) I also…
Continue

I have really been putting this off, but here I am...yes I could say my husband, but having already mentioned him in several other posts, I decided to choose someone else...that would be several someones who have made my life worth living for. My children are the greatest gift I have and have given me more purpose in life than any other single thing could. Bekah 20, Jarred 18, Lauren 17, and Benjamin 15....They are each so unique and amazing....I am so proud and honored to be their mother.… Continue

I haven't been very active, and i want to be it's just hard lately. I am trying to get myself back in order a bit. I am super busy all the time, 2 toddlers, being a military wife, school. So i have been feeling very disconnected from myself as of late, and I am having a hard time getting connected again.
As of right now I am clearing my house of clutter, being in the military we move a lot, and we downsized greatly, so we have been living in clutter, and as…
Continue

30 Posts of Truth 6. Something I hope I never have to do.

I think I'll follow Jennifer's lead and pass up any topics that involve death. Relapse would be too much of a given with any addict so I'll skip that one too. The next one that comes to mind is moving back to Louisiana. My husband was promoted a little over a year ago and we had the good fortune to be transferred to Vancouver, Washington. This is one of the best decisions we have ever made. I feel like I've finally come home. The people are so friendly and open minded. The schools are awesome!… Continue

Well Happy post-Thanksgiving folks. Here I am a oh 131 hrs, writing a little ditty to keep myself awake because someone else has decided they need to be awake at this ungodly hour. Yeah, Im a little cloudy at this moment from all that turkey and pinot, so sue me. Its just a blog. We have had a heck of a time this week with my oldest boy. He keeps waking at all hours of the night and never going back to bed, then the next day he is badtempered, anxious and uncontrollable. So here I am. Theres no… Continue