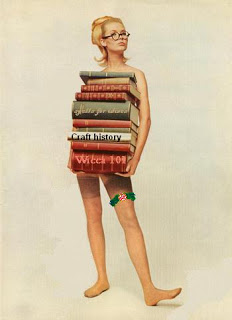 Sometimes I've been asked what are some books I'd recommend for those who are just coming into learning about the Craft, and this is the list I pass along.  Most of the tomes on here are those which would be of particular interest to those seekers with traditionalist leanings, but many are pretty solid guides which eclectic practitioners would likely find useful.

What I did not include here, but which I would very highly recommend especially for those who are going to stick with the eclectic route, is to become acquainted with their local landscape.  Thus they should either go to the library or their neighborhood bookseller and grab a book or three about plants, herbs and trees native to their area; get to know what those woods and fields and meadows all around you...heck even your own backyard...contain that would be beneficial to use in your magic.

I also didn't include any books about other aspects that may be of interest to budding witches, like herbals, aromatherapy, reiki and energy balancing books, tantra and sensuality, cooking and culinary pharmacology, divination (palmistry, tarot, pendulum), astrology, astronomy, geology and the use of stones in one's work, meditation techniques, scrying and oracular workings, etc.  My advice is before you work on these "specialties" within your practice, you might want to brush up on the rudimentary stuff first.

Magick
The Elements of Ritual by Deborah Lipp
Modern Magick by Donald Michael Kraig
Spells and How They Work by Stewart Farrar
Initiation into Hermetics by Franz Bardon
The Practice of Magical Evocation by Franz Bardon
Foundations of Magic by J. F. O'Neill
Polarity Magic by Wendy Berg and Mike Harris
Castings by Ivo Dominguez Jr.
Magick without Tears by Crowley
An Introduction to Ritual Magic by Dion Fortune & Gareth Knight
The Training and Work of an Initiate by Dion Fortune
Mystical Qabalah by Dion Fortune
The Witches Qabala by Ellen Cannon Reed
When, Why...If by Robin Wood
Summoning Forth Wiccan Gods and Goddesses by Lady Maeve Rhea

General
Aradia: Gospel of the Witches by Charles Leland
Naturan Witchcraft by Marian Green
The Triumph of the Moon by Ronald Hutton
The Pagan Religions of the Ancient British Isles by Ronald Hutton
Wiccan Roots: Gerald Gardner and the Modern Witchcraft Revival by Philip Heselton
Mastering Witchcraft by Paul Huson
Witchcraft: The Old Religion by Leo Louis Martello
Wicca Covens by Judy Harrow
Spiritual Mentoring by Judy Harrow
Call of the Horned Piper and Masks of Misrule, both by Nigel Jackson
The Sacred Ring by Michael Howard
The Roebuck in the Thicket by Evan John Jones
The Golden Bough by Sir James Frazier
The White Goddess by Robert Graves
The Witches God and the Witches Goddess, both by Janet and Stewart Farrar
Ancient Ways and Wheel of the Year by Pauline Campanelli

any of the Discworld series by Terry Pratchett
any of the Merry Gentry series by Laurell K. Hamilton

This is a reprisal of one of my older blog posts to be found at Flying Off The Broomhandle and I do maintain all copyright for this intellectual property. Material may not be copied, forwarded or displayed elsewhere without my express, written permission. Blog contents © "Albiana" (M.F.S.) 2008-2011; All legal and karmic retribution will be employed, to the fullest extent, against any who think to steal the intellectual property of others. May the Gods preserve the Craft!

"Wicca: The Old Religion in the New Millennium by Vivienne Crowley"

I would like to say that this book holds special importance for me as it is a nice summary of general beliefs.

Comment by lucy on February 26, 2011 at 10:26
thanks for this albiana, im always on the lookout for new reading material.. think im going to be amazons best customer for the next few months.. :)