... but I sure am a funny bastard to watch. Entertaining, if nothing else. Just got re-banned from WT, for this;


I'm certain you don't. To expect you to make the connection between me and the group that was the top on WT for about a year would be absurd, and giving you much, much more credit than you deserve. However, I know who *you* are. I know a lot of things about you, Brian, from watching how you've run this site for the last three years.

Do you remember the user SilverKitten? I think she was 14 when you propositioned her for sexual content, just before you freaked out and put the 17+ age limit on the site. That effectively erased her and her accusation, and any proof she had from the private messages you'd sent her. You and Syn did will on covering that up.

Except it just didn't stop there. The site kept growing and growing, and you started to see that it was an excellent source of income! Look, all these silly wiccans and pagans, they were a GREAT source of advertising income! So you kept upgrading and modernizing the site, all the while with dollar signs in your eyes.

But there was a problem... some people actually took this pagan thing seriously! When some of the new members came on, claiming to be related to characters in Harry Potter, the older, more seasoned and knowledgeable members sent them packing. If someone claimed to be half elven, or raised by Faeries, they were corrected firmly. These posers threw fits, and left the site. Oh, no no no, this wouldn't do. Members leaving was an unacceptable churn. This had to be stopped! Slowly, you clamped down on the ability of members to correct inaccurate information, for the sake of the almighty dollar. First the control of the language, terms, and methods, then the control of the content. Then, once we found loopholes, and started pressuring you to actually act instead of hide, you snapped and started cutting out the few people who were working to keep this site genuine. All because you were outed for not removing a known sexual predator who was collecting under-aged female friends, the same under-aged female friends you yourself said you approved one-by-one.

Are you going to say I am lying? I have proof. 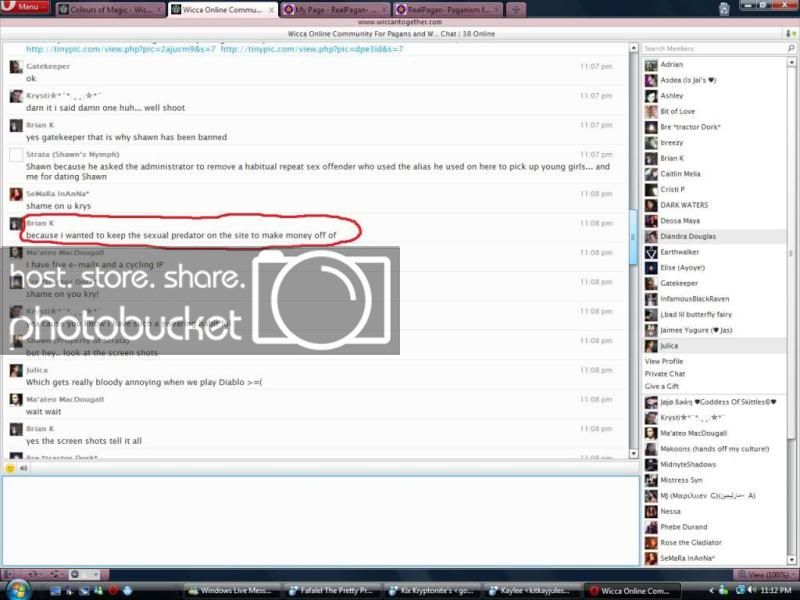 And finally... what you were shown.

He raped a girl under the age of 13. And you let him stay on here until the issue and offender were reported. You only acted when your own hide was in danger via personal liability. And you acted to cover your ass, not protect the community.

Annddd i love you all <3 this is epic shawn!!! -if you want more details on the SK issue message me!-

Comment by Leisha on December 9, 2010 at 6:39
Eh, I wouldn't worry about advertisers or the FBI. I'd be more concerned what would happen if his wife found out about it. Hell hath no fury like a woman scorned.

Comment by Scorpion One *The Old Goat* on December 8, 2010 at 23:34
When the FBI does investigate him it will be fugly. They have a habit of digging deep into harddrives and data retrieval devices... Theres a former peditrician here locally that pops up on the news every 3 or 4 days (for over a month) to update his victim count when a new one is uncovered. It was up to 28 Wednesday morning. Wonder what Brian Ks count will be before its over?

Comment by Unceelie Queen on December 8, 2010 at 8:37
Beorc,
I think what you're doing is very noble and commendable. I'm a parent myself, and the thought of my son possibly encountering these sorts of creeps one day on the internet terrifies me. I do think that Brian isn't able to be shamed however. The guy just doesn't care- he's in it for the money, plain and simple. I think you'd be able to do further damage if you hit him where it hurts- the pocket. Have you considered browsing WT and making note of the companies that advertise there? Perhaps by notifying them of the sexual predation so common on WT, they may decide that they no longer want association, and will pull their ads. Also, is brian using programs such as Google Ad Sense? They may also decide to no longer allow him to use their program if notified. Just some thoughts that may help. ;)

Comment by VLM on December 6, 2010 at 10:58
Let me ADD, however, that he did freak out on me stating "You threatened me with the FBI!" about the why I was banned... I did no such thing, and I literally just let him know what i'd done about the registered child predator, Angel Snowden, that was on his site, in terms of the authorities... I said I WOULD contact the FBI after the Sheriff's office, if they told me to.

Comment by Beorc Kano on December 6, 2010 at 10:48
That makes sense, Shawn. Amending it to reflect the truth, then. Thanks for the clarification. :)

I didn't report Brian K. He's within his rights to allow everyone and everything on his web site. I first "outed" the sex offender to BK. The first note, I sent him at 12:32pm, Dec 1. The second, at 10:30am Dec 2. The 3rd I sent him later that evening, which tipped off the whole thing...

He banned my account (and Strata's funny enough, I guess for being engaged to me,) less than 5 minutes after I sent it. Luckily I had a screenshot (Above.)

It *sucks* that BK doesn't care enough about his users to protect the innocents, and only cares about his personal liability.

Comment by Beorc Kano on December 5, 2010 at 22:07
Aye. I've been using it as a stick to hit WT with. It's been working pretty well recently..I've been through 4 profiles so far! Brian can't stop me, because in order to stop me entirely, he'd have to stop approving ANYONE!

Comment by Tawny on December 5, 2010 at 12:05
Thanks Elyria... Unfortunately it seems like a lot of these types of people have been "allowed" to be on that site