The Box the Key and the choice

If i handed you a key and told you that it went to the greatest power the world has every known, and then i told you where box the key went was followed by telling you that you couldnt open the box ever and left you to it. But before i leave you i tell you that one day someone will come and want you box.

1. would you open the box even though the person who gave you the greatest power the world has ever known told you not to ?

2. would you leave the box closed and respect the wishs of person who gave you such a great gift and trusted you with it

(no this is not pandoras box)

1.) You have choosen to leave the box closed and respected my wishs. Fast forward 10 years you still have the box un opend and a stranger comes into town and sees your box after close inspection he asks why has this box been closed for so long. You explain that someone gave you this box long ago and gave you the key. You also tell the stranger that it holds the greatest power the world has ever known, but you where not to open it. This intrests the stranger to no end after thinking about ti for a moment he comes to you and says "im willing to give you everything i own including 3million dollars and 2 multi million dollar companies. After holding this box with so much power for so long and not getting to open it you have learnd a valuable lesson (we will get to that later) so you agree and give him the box and key also you keep in mind what i told you and tell the stranger the same. after the transaction you notice the stranger is about to open the box. As anyone would you stick around to see what is in the box.

Now before i finish the first one lets move on to number 2.

2.) This time as you may know is going to end very diffrently. So you curiosty has got the best of you as it often does with most people unfortuntly. So after i am long gone you take the box gather all the people you know and prepair to open it. Now as anyone knows a story like this spreads like wild fire and sparks the minds of very powerful people. So needless to say you have a big circle of people around who dont take kindly to foolishness. as you open the box slowly the crowd comes closer intell it is fully open. Inside there is note that reads "Your greed consumes you, from greed comes chaos for not honoring the one simple rule i set for you, you get nothing."

1.2) Now we know whats awaiting the fellow who has bought your box, as you and the stranger read the note you realize what has happend. Becasue you waited for so long and didnt open the box you have been rewarded not just with the millions of dollars but a lesson which no price can be set upon because you are not greedy you know have the ability do good not only for yourself but anyone you come in contact with.

Im sure i have to say no more about the moral of the story.

thanks for reading -Aine 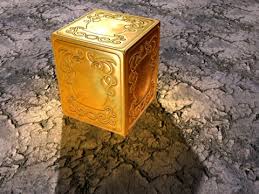 Comment by Unholy Angel (Aine Spark) on December 30, 2010 at 9:06pm
lol to be honest i just thought ok key box hmmmm lets see what comes out of this i had no idea how the story was going to end when i started

Comment by moonlit night on December 30, 2010 at 8:54pm
The greatest power we can give ourselves is the ability to be honest with ourselves-the key- I will be who I am-not what you want me to be.