Due to the personal nature of the petition being made, some details will be omitted from this account.  However, I believe that the important information is being passed along. :)

This blog will illustrate a personal petition ritual I preformed, involving a Rose of Jericho (Resurection Plant) and a Saint Expedite candle.

If you are not familiar with the Rose of Jericho, they are remarkable plants.  They are considered talismans for protection, blessing, and prosperity.  When dormant they resemble tumble weeds or dead cedar boughs. Mine looked like this:: 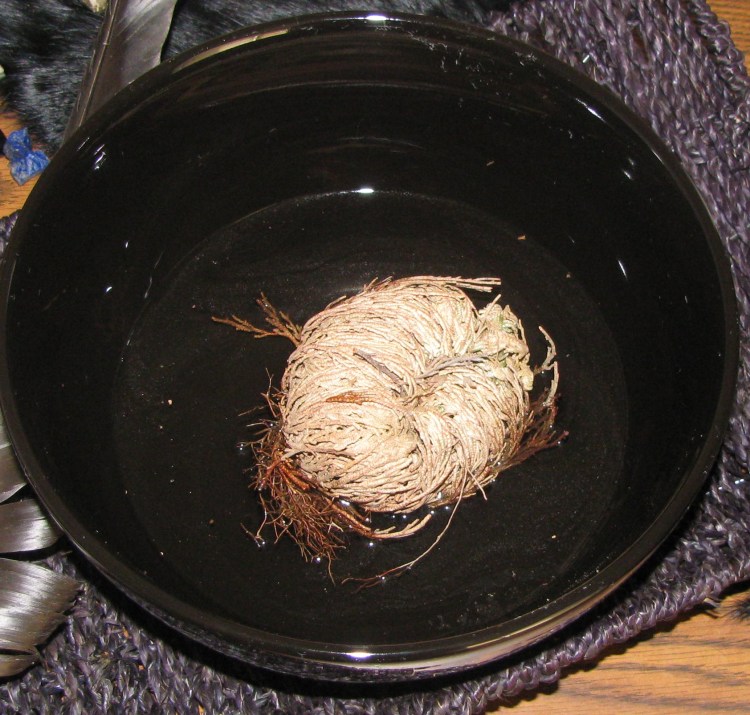 As you can see, I have placed it in a bowl containing a couple inches of water.  The plant is not dead, simply dormant.  Once placed in water, it begins to open up.  After two hours, it looked like this:: 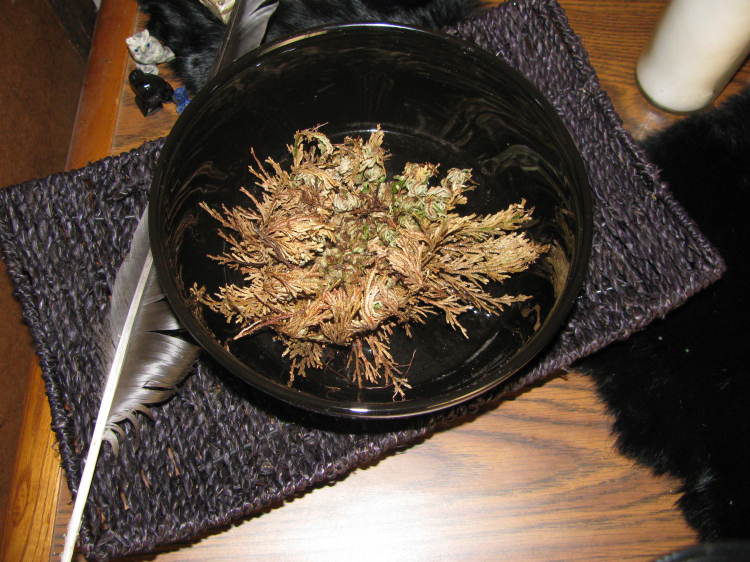 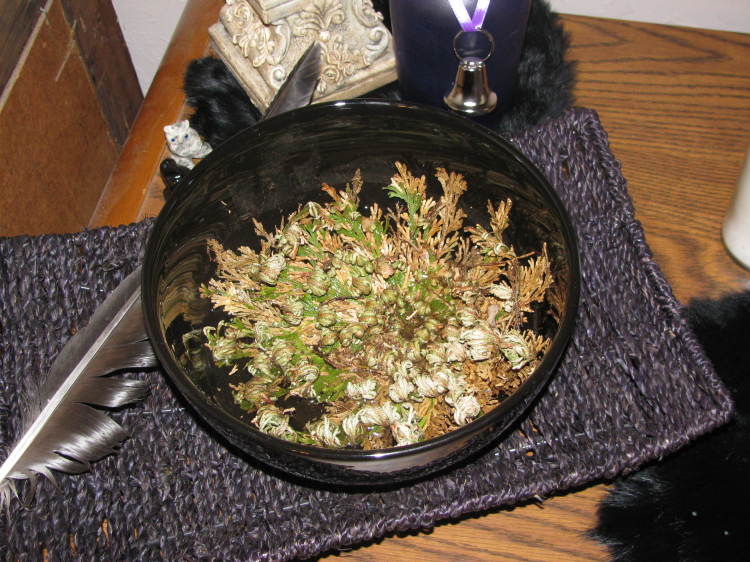 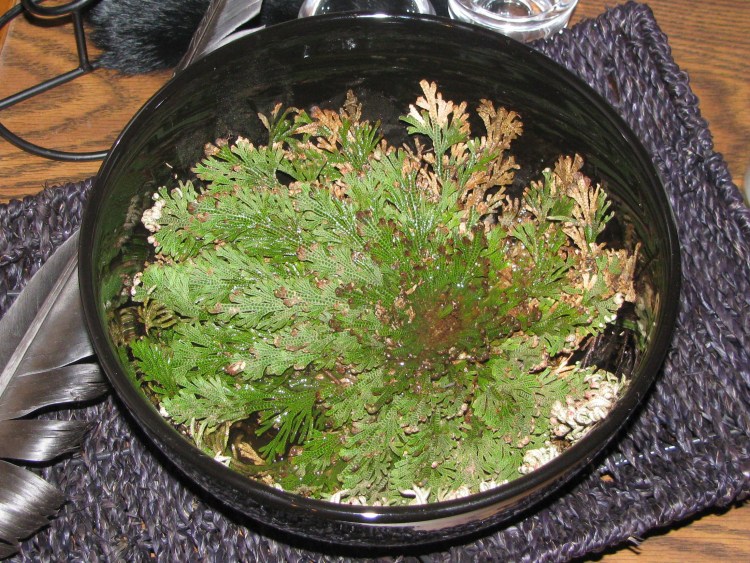 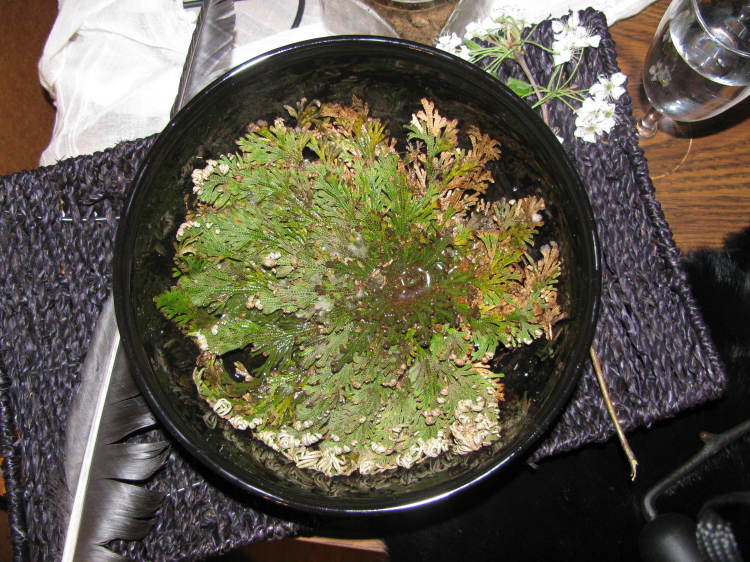 On the seventh day, Wednesday (I chose this day because it is the traditional day to work with Saint Expedite.), I removed the Rose of Jericho from its water.  I saved a portion of the water in a small hermetically sealed jar for use in future workings, and discarded the rest.  When the Rose of Jericho is removed from its water source it begins to slowly return to its dormant state, closing up.  The idea is to seal your petition inside the closed plant until the time that it is granted.

At this point, using a small taper candle I lit my Master Candle and allowed it to cook, while I began to construct my petition. Taking a small piece of paper, I wrote my petition out, while concentrating on it being fullfilled.  I then annointed the paper in a five-face-die pattern, one dot in each corner and one in the center.  For this work, I used Lucky Mojo's Blessing Oil.  After the annointing, I folded the paper in half once, towards my body.  Then in half again, and then once more.  Always towards my person, and always concentrating on my desired outcome.  Then, I placed the petition in the middle of the still open plant, on my altar, along with two small personal items. 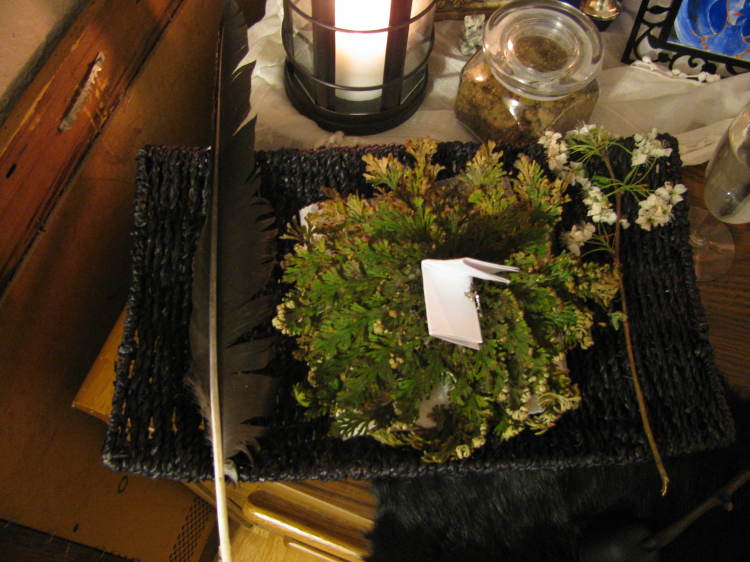 With a small taper candle I transfered the light from my Master Candle to my Saint Expedite candle, both on my altar. 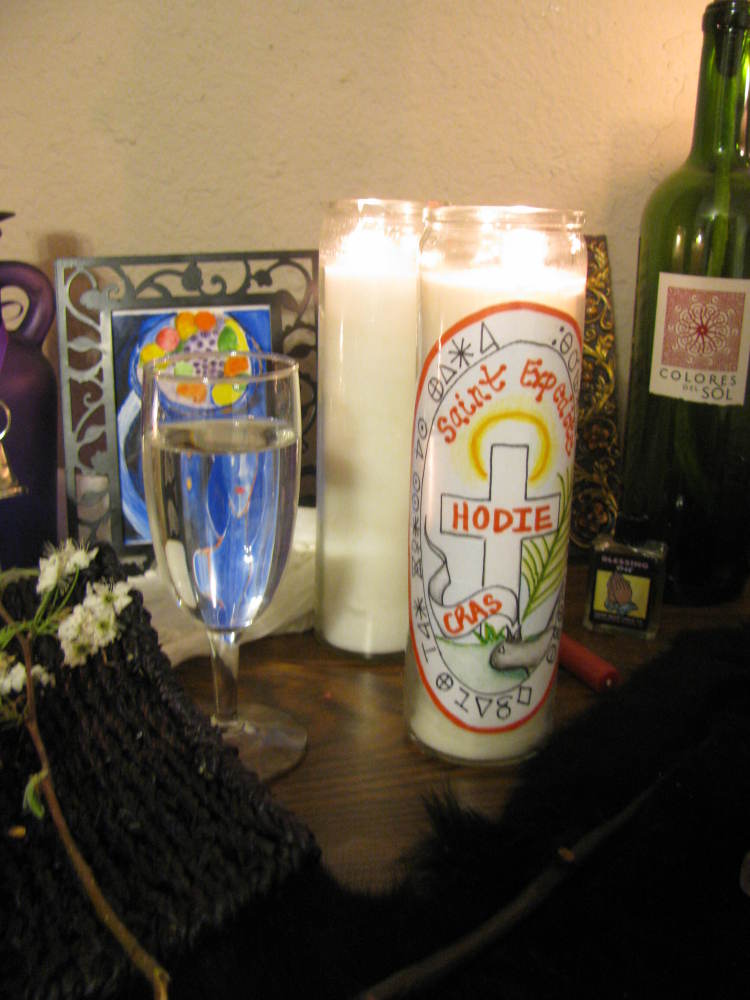 Then, I said a small prayer to Saint Expedite, asking him to lend his speed to my petition.  To keep anything from delaying it, to "expedite" it if possible, and to provent those involved from procrastinating on anything that might slow down my petition. In return, I vowed that, once the petition was granted, I would light a red candle in his honor every Wednesday for a year, and provide him with offerings of fresh flowers and sponge cake.  I allowed the candle to burn for a few hours before pinching it out, and I will continue to light it every day until it is almost gone, at which point I will blow the candle out.  Once, the petition is granted I will use the empty novena as a vase for offerings of flowers to the Saint.

When the petition is granted, I will place the Rose of Jericho back in water, where it will once again leave its dormant state and open. (They can repeat this cycle for years)  I will remove the petition and items and use the Rose for another work.  I will also begin my offereings to Saint Expedite, for a year, from that day.

For general information, *I* chose to do a weekly offering for a year because my petition is a bit tricky and extremely important to me.  A weekly offering is by no mean necessary.  A one time offering will often do.

Do shut up Grayson, Read both blogs before speaking!

Ok, now I have read the blog on making the Saint Expedite candle and who he is/was, and I kinda like the guy. AND I have a use for him.

Now all I have to do is look for some of this type of candle over here. :-)

Nice working Strata. Again, I have never worked with the saints, and don't think I could/would. But the ritual is lovely and I like the combination of the plant and candle magic.

Good luck in the working.

Thinkin about it, the reason I couldn't do this working my self would be the trying to remember to do the weekly offering, every week for a year! But thats just me...........(",)

Comment by Strata on March 24, 2011 at 12:29
Stef -- I use to consciously avoid anything relatively Abrahamic because of my upbringing anf the society I live in.  I changed directions there recently and was really taken by surprise. It was almost like a slap in the face really... lol  What I was avoiding is what works best for me. :P

He, like many of the "Saints," is not in exact accordance with High Church canon because they are folk Saints, not officially accepted by the Catholic Church.  These Saints, in my opinion, tend to have much more colorful personalities and energies.  Patience is a virtue, no?  So where does Saint Expedite fit into that doctrine? :)

Caution should be taken when working with any Saint/Spirit.  Take Saint Jude, for example, an "official" Saint.  I have seen several warnings regarding calling on this Saint based on the nature of his help.  Practioners are cautioned that if they are not careful St. Jude might bring about repetitive circumstances of desperation in their life, so that the practioner must continuously call on him.

Comment by Alorer (The Gecko) on March 24, 2011 at 12:01
My upbringing and current life, academic and not, is so filled with Christianity that I find I simply cannot work with it! :D

Comment by Sangraal on March 24, 2011 at 11:36
While it is true that my second point may apply to other saints, I have not quite seen such a perpetually iterated caveat among any other. That being said, I do not believe Expedite is exactly on par with the rest of the High Church canon, where the concept of forgiveness reigns. Rather, *much* like Santa Muerte, I believe he is not quite a saint in the typical understanding of the word, but something more immanent and direct.

My understanding of him was in the way I previously wrote, with water, et al. However, if he comes through, it can only means he accepts the offerings promised, and from that point, it is what ultimately matters. Best of luck in it.

I just recently started working with Saints and hoodoo.  I've found, much to my surprise, that Saints, Psalms, and Abrahamic references and symbolism really resonate with me.  Most likely due to my strict Christian upbringing.  I still have those strong connections that were formed when I was very young.  Now, I use them in a different way.