Remembering With My Brothers 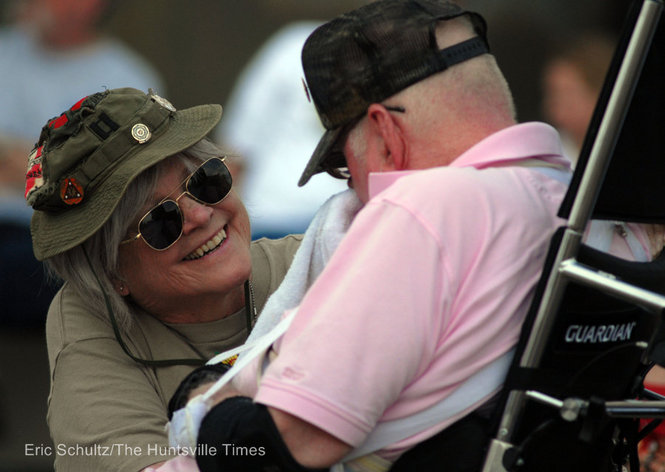 Carol Kirk, a nurse in Vietnam from 1969-1970 comforts Paul Stanger, an Air Force veteran who served in '68, '70, and '72 and was overwhelmed with emotions during the first annual Welcome Home Vietnam Veterans Day event at the Huntsville Veterans Memorial Thursday, March 29, 2012 in Huntsville, Ala. (Eric Schultz/The Huntsville Times)

This picture was taken of me on 3/29/2012 as we celebrated Vietnam Veterans Welcome Home Day here in Huntsville.  I appreciate the effort that was made, and maybe it's mean-spirited of me.   But to me the day came 40 some years too late...too late for some of my Brothers who died before their nation could acknowledge the sacrifices that they and their families made those many years ago.

Once upon a time I swore some pretty hefty oaths to take care of my Brothers no matter what.  As far as I'm concerned those oaths are still in effect.  Whenever I'm at something like this or at the Wall, I'm always looking for any of the men who are having problems and try to help.  I tell them to hold my hand and it will be OK...just as I told them long ago.  Some wounds just never heal.

And being that I was feeling just a bit bitchy...when they asked for one man from each of the services to come up and tell their story I decided that I wasn't going to let the women go unremembered.  So I invited myself up to the microphone and asked that people not forget the 7500 women who also served in that war and who also bear the scars that warfare leaves.  And my Bros gave me a rousing cheer.

There are those amongst the Pagan community who look down on those who were called to be Warriors.  I think that they miss the point that those of us called to serve do so out of duty to protect our nation and our loved ones...not because we like to fight or kill  Had you seen the love and brotherhood amongst those in that memorial service I believe you'd have another view of what soldiers are like.  When we came home we were spit on and deviled, even though many didn't have a choice in whether to go or not.  We've all remembered that, and we make sure that vets coming home from Iraq and Aftganistan are welcomed properly.  We claim the motto "Never again will one vet abandon another.  No one left behind!"

Resonating... I am a devout peacekeeper and pacifist, however I know this global society of ours would be a far different place were it not for the bravery and sacrifice of these people.

The time for wars is over and that motto would do well for a Global Motto...

"Never again will one human abandon another.  No one left behind!"

Sorry to double-post, but I just recalled a video I saw a few months back.  It's an episode of History Detectives, the PBS show.  I found the first story - about a Vietnamese diary - really touching.  It was one of those stories that I think demonstrate that we are healing from the war, if slowly.

I saw this when I was answering your greeting, and I'd like to offer a response.  My intention is to be entirely respectful because I recognize that you seem to be a very good and self-sacrificing person.

I'm very torn when I see articles (or other data) about veterans, especially those who served in Vietnam.  I grew up in 1977, so I wasn't in a position to be at the heart of these events.  For me, when you say "Vietnam," I think of the famous photograph of the napalmed little girl.  It's not the only reality of the war, but it stands for our extreme oppression of a country that is still, in many ways, recovering.  It's a tough issue for me, but here are three ideas (an idea and two sub-ideas?) I'd like to offer:

1. Though the burning child isn't the only reality of the war, it's part of the truth and shouldn't be ignored.  I believe most soldiers would see it as atrocious, but not all.  Then again, I felt the counter-response to Vietnam was too critical of common soldiers and not critical enough of leaders.  I don't think greeting returning soldiers with harsh words and a lack of forgiveness was the correct response.  That could only alienate those soldiers and close the door on a dialogue.

2. I've never supported any veterans' causes, but it isn't because I don't feel compassion for certain individual veterans.  Rather, it's because I never see any support for the conscientious objectors.  They also endured hardships and deserve recognition; instead, they're often spurned, just as they were when the war was going on.

I guess these points are really just expressions of...

3. In my estimation, war is the process by which the rich of two or more countries or empires cause their poor citizens to settle their disputes by harming one another.  The poor American soldiers and supporters were treated badly; the poor of Vietnam were treated badly.  Although there seemed to be a national division, I believe a more important division was that of economic class.

Wow.  I didn't know I'd have that much to say about a war that really isn't part of my own life (and one from a time in which I'm fairly sure I've never existed corporeally).

I hope you take no offense to these remarks.  Your personal effort was and is laudable - I can see that clearly, even if I can't support the general cause.