There is a humourous story about Saint Expedite's arrival in New Orleans.  According to folklore, when the Chapel of Our Lady of Guadalupe was being completed, the priests commissioned a staute of the Virgin from Spain.  When the crate containing the statue arrived another crate accompanied it.  On the second crate was written the word "EXPEDITE" and inside was the statue of a Roman Centurion.  The priest mistook the shipping instructions, "EXPEDITE," to be the Saint's name.  And so Saint Expedite arrived in New Orleans.

Saint Expedite is a folk saint, not formally accepted by the Catholic Church.  However, he is popular in Spain, Portugal, Italy, Latin American, New Orleans, and among hoodoo.  He is typically called upon to "expedite," or speed up, workings or petitions.  He is also called upon to assist in breaking the bad habit of procrastination.  A practioner will call on Saint Expedite with the vow of an offering once the petition is granted.  Typical offering for this Saint are fresh flowers, sponge cake, and red candles.  It is important to wait until after the petition has bene fulfilled and to FOLLOW through with your vow.  You can find out more about Saint Expedite from Lucky Mojo and Saint Expedite Org.

Saint Expedite is usually depicted as a Roman Centurion with his right foot standing on a dead raven.  From the raven's mouth there is a word-ribbon, CRAS.  The Saint also carries a cross with the word HODIE on it.  CRAS is Latin for "tomorrow," while "HODIE" is Latin for "today."  The Saint is essentially snuffing out tomorrow in favor of today.  Don't put off until tomorrow what can be done today.

Where I live it is very hard to find Saint Candles.  I can find the plain white novena's, but the colored ones are almost impossible.  Therefore, when the need arose, I was inspired to create my own.

I started with plain cardstock and created a design that symbolized, to me, Saint Expedite.  ***This is my own, original work, based on tradtional symbology.: 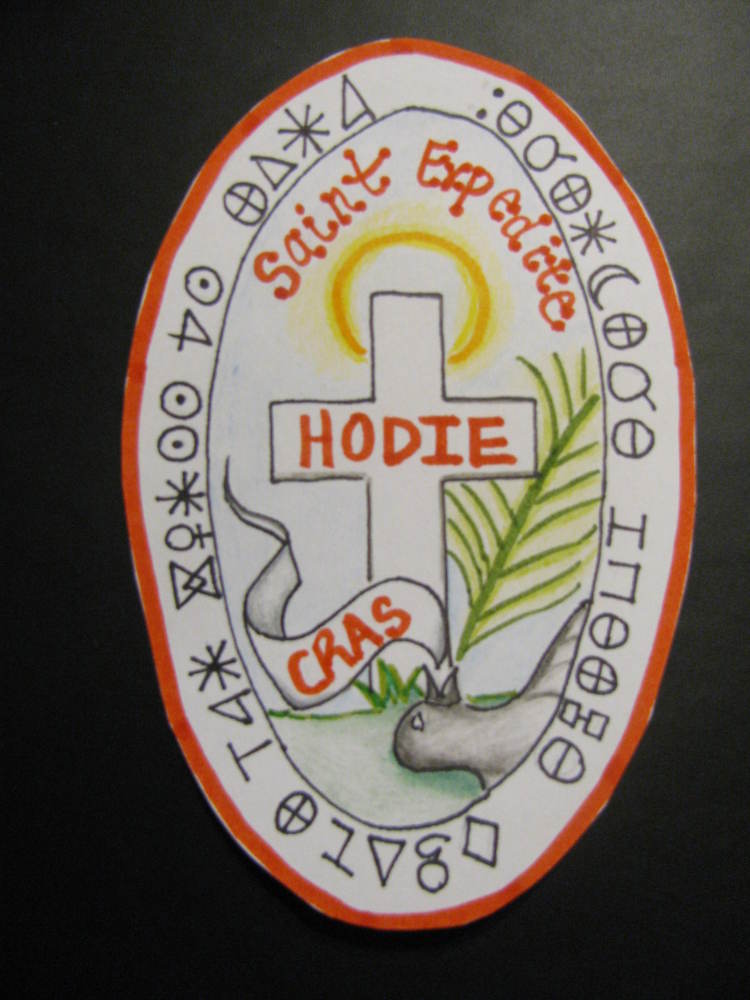 My design includes the dead raven and it's word-ribbon, CRAS, along with the Cross inscribed with HODIE.  Today instead of tomorrow.  The Cross is haloed in honor of the Saint.  Around the edge reading from  the top, clockwise, it says "Protector, Martyr, Swift One, Bless Us, Amen."  For this I used Illuminati script, simply because it is something I am fairly familiar with.  I chose red for the border and internal writing because it is the color generally associated with Saint Expedite.

Traditionally, one would use a red candle for Saint Expedite, but red novenas are not easily available to me, so I chose a white novena candle instead.  I cut the design out, as seen above. Then, using clear plastic packaging tape, I carefully attached the design to my candle, making sure to cover all the paper to protect it. 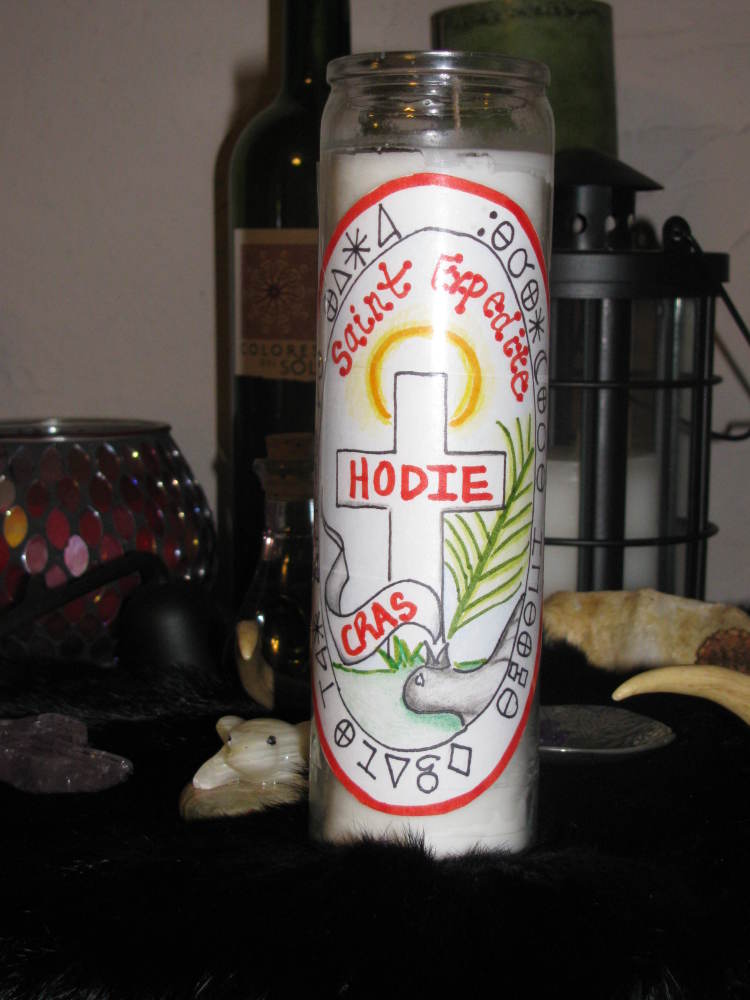 Once completed, I dressed the top of the candle with Lucky Mojo Blessing Oil. Lucky Mojo also makes a Saint Expedite Oil that would, of course, be appropriate.  I rubbed a portion clockwise around the top three times.  Then I placed my candle on my altar until the time came to use it.

Comment by Rachel Ann (EisHexe) on April 2, 2011 at 14:46
This is very inspiring!  As soon as a get my hands on some money (come on Tax Man, pay me back now!) I'm heading over to Lucky Mojo to grab some raw materials.  Like you, I can't find any saint candles where I live either, except for the blank white novena, Christ Candles and the Virgin of Guadalupe Vigil Candles.  I love your label, very creative and very nifty!  I'm inspired to make my own Saint and Specific Purpose candles!  :D

Comment by Nuit on March 23, 2011 at 23:23
Here in my country my people commemorates Saint Expedite'day on april 19th. He is the one who helps people to get what they want fast.We here don't question his existence but here people don't obey the catholic church so much. Syncretism is everywhere. Blessed Be!