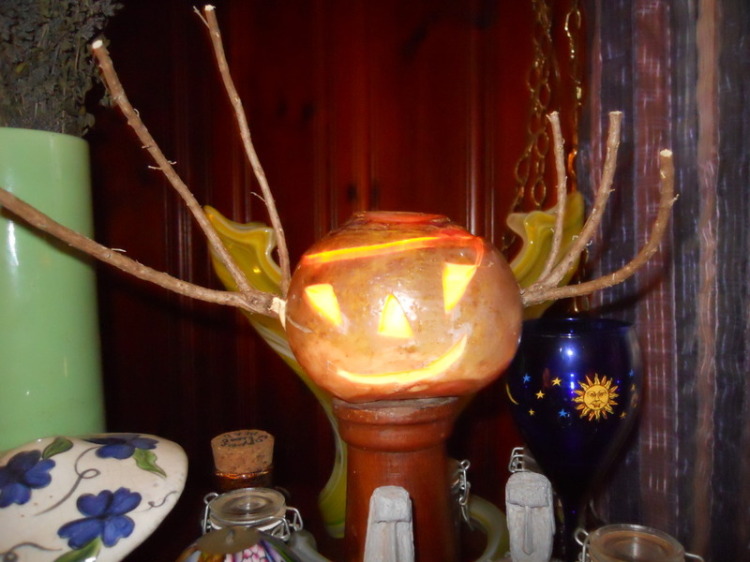 A CAUTIONARY TALE....
Every now and then I feel compelled to share a bit of practicle real world info I have aquired the hard way,this is one of those times.Ok now that I have your attention ,Im going to confess to last years' Samhain experience.Every year this time we are bombarded with the fact that Jack O Lanterns started off as turnips /rutabagers back in the day.The articles are factual,fluffy,and always accompanied by a picture of a carved pumpkin.Well me being me I decided it was time I made a real Jack. So off I went and found the biggest rutabager I could.Now comes the info all these people deemed unimportant and didnt include
so for any of you that might ever try this please read on.
First Rutabagers are damned hard unlike a soft pumpkin this fellow makes you work for it! There is no such thing as scooping it out ,you simultaneosly have to gouge the inards out ,hold the round slippery bastard down and avoid it shooting off the table and taking out your cup of coffee.Yes thats right Jack can and will take out your java if he gets the chance.But eventually I won and managed an ok face and even gave the inglorious frack a set of nice Oak branch horns.Since I wanted to do the "real" Samhain deal this was late in the afternoon on Samhain.I placed him in his spot of honor and as the last daylight slipped away I scurried around throwing salt setting a circle around my house and all those witchy things I do.At last I slipped into my home and lit all my many candles (Jack being the last )and settled in for my beloved binge of creepy movies.Here comes the other thing all those authors dont tell you.........candlelit rutabagers smell like Cat Piss!!!!! Now perhaps If I didnt have two cats I would have caught on quicker .But I do so my first thought when my nose picked up the wafting odor was to jump up and start looking to see where the hell the puddle was.Well I searched and searched becoming more and more frustrated because the smell was getting worse by the minuet!Finally I narrowed it down to one corner of the living room,armed with a rag and Lysol I started pulling out furniture to see where it was.You have no idea how dumb I felt when it finally dawned on me that the smell was radiating from Jack who was just watching and grinning. The point to this is ....there was a reason those were placed Outside the door and now that I know what it was so do you !!!!! lol

Thank you so much for that oh so visual story!  I laughed loudly as your humor reached out!

Peace be with you.