Tasseography (also known as tasseomancy or tassology) is a divination or fortune-telling method that interprets patterns in tea leaves, coffee grounds, orwine sediments.

The terms derive from the French word tasse (cup), which in turn derives from the cognate Arabic word tassa, and the Greek suffixes -graph (writing), -logy(study of), and -mancy (divination).

There is no scientific evidence that the future can determined through interpretation of these patterns, and it is considered a pseudoscience or fringe science.

The first inklings of Western tasseography can be traced to medieval European fortune tellers who developed their readings from splatters of wax, lead, and other molten substances. This evolved into tea-leaf reading in the seventeenth century, a short time after Dutch merchants introduced tea to Europe via trade routes to China.

Scotland, Ireland, and England have produced a number of practitioners and authors on the subject, and English potteries have crafted many elaborate tea cup sets specially designed and decorated to aid in fortune-telling. Cultures of the Middle East that practice divination in this fashion usually use left-over coffee grounds from Turkish coffee turned over onto a plate.

After a cup of tea has been poured, without using a tea strainer, the tea is drunk or poured away. The cup should then be shaken well and any remaining liquid drained off in the saucer. The diviner now looks at the pattern of tea leaves in the cup and allows the imagination to play around the shapes suggested by them. They might look like a letter, a heart shape, or a ring. These shapes are then interpreted intuitively or by means of a fairly standard system of symbolism, such as: snake (enmity or falsehood), spade (good fortune through industry), mountain (journey of hindrance), or house (change, success).

Melton's described methods of pouring away the tea and shaking the cup are rarely seen; most readers ask the querent to drink the tea off, then swirl the cup. Likewise, his notion that readers give intuitive interpretations reflects his unfamiliarity with teacup reading; most readers use the standard symbols that have been handed down through several generations. There are, however, many who prefer to read by feel and intuition, as stated by Melton.

It is traditional to read a cup from the present to the future by starting along the rim at the handle of the cup and following the symbols downward in a spiral manner, until the bottom is reached, which symbolizes the far future. Most readers see images only in the dark tea leaves against a white or neutral background; some will also read the reverse images formed by seeing the symbols that form in the white negative spaces, with a clump of dark leaves forming the background.

Some people consider it ill-advised for one to attempt tasseography using tea from a cut-open tea bag or to use a symbol dictionary. The reasons for these prohibitions are practical: tea-bag tea is cut too finely to form recognizable figures in the cup and tea-leaf reading has its own historic system of symbolism that does not correspond exactly with other systems, such as symbolic dream divination.

Although many people prefer a simple white cup for tea leaf reading, there are also traditions concerning the positional placement of the leaves in the cup, and some find it easier to work with marked cups. Beginning in the late 19th century and continuing to the present, English and American potteries have produced specially decorated cup and saucer sets for the use of tea-leaf readers. Many of these designs are patented and come with instructionsexplaining their mode of use. Some of the most common were those that were given away with purchases of bulk tea.[citation needed]

There are dozens of individual designs of fortune tellers' cups, but the three most common types are zodiac cups, playing card cups, and symbol cups. 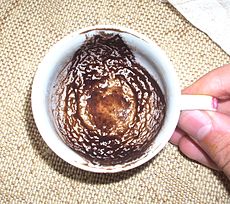 Coffee tasseography is called καφεμαντεία in Greek or kahve falı in Turkish. Traditionally, coffee readers use Turkish coffee or any method of coffee brewing that leaves grounds sitting at the bottom of the cup. Most of the coffee in the cup is consumed, but the sediments are left to settle. It is often believed that the querent should not read his or her own cup.

There are several variations of coffee reading. They commonly require for the cup to be covered with the saucer and turned upside-down. In the Turkish tradition, coffee-readers often interpret the cup as being divided into horizontal halves: symbols appearing on the bottom half are interpreted as messages regarding the past, and symbols on the top half are messages regarding the future. The cup may also be interpreted in vertical halves to determine "yes" or "no" answers as well as the overall outcome of the events represented by symbols. For example, some fortune tellers may "read" symbols in the "left" half as "negative" events or outcomes, while symbols in the "right" half are "read" as "positive". Other readers may adhere to the belief that the cup is capable of revealing insights about the past, but it cannot predict events beyond forty days into the future. The saucer may also be incorporated into the reading. As with the cup, different variations exist for what the saucer represents, including whether the saucer sticking to the cup indicates a "positive" or "negative" outcome.

Other traditions, such as those practiced in Romania, require that the sediments be swirled around the until they cover the majority of the cup's inside surface. Other traditions, such as Turkish and Middle Eastern, do not require this swirling but do require that the cup be turned towards the querent in revealing the fortune. The coffee grounds are given time to dry against the cup before a reading begins.

Many interpretations for symbols exist, but readers commonly focus on the color of the symbols. Since most cups used are white or ivory and the grounds are dark, symbols are formed from the strong, contrasting colors. White is considered a "good" symbol foretelling of generally positive things for the querent, while the grounds themselves are considered to form "bad" symbols.

Symbols can be many things, including people, animals, and inanimate objects. Usually, the fortune teller will group nearby symbols together for a prediction.

After a reading, the querent will be asked to "open the heart". This is done by placing the right thumb at the inside bottom of the cup and twisting clockwise slightly. This will leave an impression behind that the fortune teller will interpret as the querent's inner thoughts or emotions.

Some symbols and their meanings include:

In 2007, a coffee-reading fortune teller from Israel was charged with practicing magic, a crime punishable by up to five years in jail. The fortune teller in question was acquitted of the charges after the Israeli government deemed it too hard to prove she was knowingly "faking it".

A divinatory form of fortune-telling by reading tea leaves. It is also known as tasseography. Tasseomancy originated in the Middle Ages stemming from ceroscopy and molybdomancy. In the 17th century, the West Dutch Indies merchants introduced tea from the Orient. Tea drinking became a popular custom which gave rise to the divination of tea leaves that remained in the bottom of the cup.

Tasseomancy is largely dependent on psychic intuition. Tea is poured into a cup without the use of a strainer. The one seeking psychic help, the inquirer, consumes all of the tea in the cup. If any moisture remains it is shaken out onto a napkin.

The leaves remain in the bottom of the cup which the diviner observes to see what patterns are formed. A letter, heart shape, or a ring might be observed. There are some standard symbolisms which are observed when interpreting the patterns: snake (enmity or falsehood), spade (good fortune through industry), mountain (journey or hindrance), house (change, success).

Another method is to leave a little moisture in the cup. This allows the leaves or dregs to be swished around. The cup is the upturned into the saucer. The reader picks up the cup and begins examining the formation of the dregs. As in the above described method, the dregs can form patterns such as letters, numbers, geometric designs, straight or wavy lines or shapes which resemble animals, birds or objects. Again, various symbols have particular meanings: straight lines indicate careful planning and peace of mind, while a cup shape indicates love and harmony. Time frames are also indicated by estimating the proximity of the leaves to the rim. Dregs closer to the rim and handle represent the immediate future, while those at the cup's bottom indicate the far future. Some diviners say they can only predict twenty-four hours into the future.

Due to technical modernization tea bags have arrived, but readers have circumvented this by cutting the bags and dropping the leaves into the cup. In some instances coffee grounds are used, but the practice is less common.

Italians, in the 18th century, claimed they invented the coffee-ground form of the divination. Also, they believed the prophecies came from demons so the diviners recited incantation during their practices such as: "Aqua boraxit venias carajos," "Fixitur et patricam explinabit tornare," and "Hax verticalines pax Fantas marobum, max destinatus, veida porol." It was believed that if such incantations were done incorrectly, the reading would be inaccurate.

Tasseomancy is currently conducted in England, Ireland, and Europe. In the United States it is primarily practiced in larger cities in "Gypsy tearooms" and in restaurants and other establishments which furnish back room fortune-telling services. Some occultists practice it too. A.G.H.

I was that way when I started......its just a love for tea and figuring stuff out.....and now I am the only one who does TEA READINGS at Psychic Fairs when I can find one and can get in..