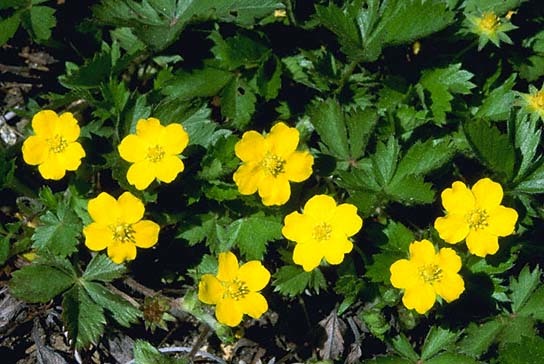 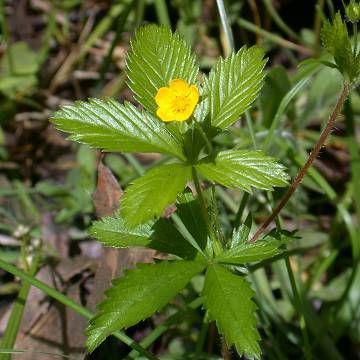 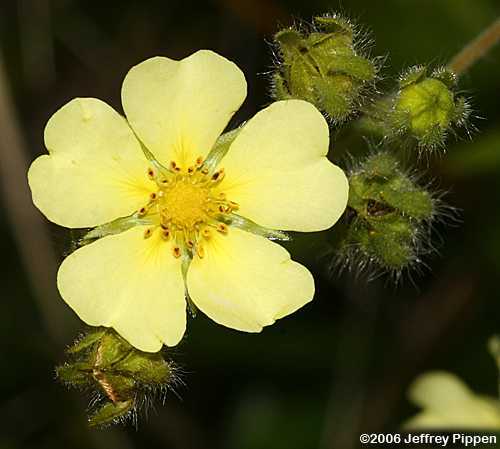 In Arkansas there are two common species of Cinquefoil;

Typical cinquefoils look most similar to the strawberries, but differ in usually having dry, inedible fruit (hence the name "barren strawberry" for some species). Many cinquefoil species have leaves divided into five leaflets arranged palmately like the fingers of a hand. Because of such shape of leaves, some species are called five-finger. Some species, such as the Barren Strawberry, have just three leaflets and others (e.g. P. anserina) up to 15 or more leaflets arranged pinnately. The flowers are usually yellow, but may be white, pinkish or even red; the accessory fruit are usually dry but may be fleshy and strawberry-like, while the actual seeds – each one technically a single fruit – are tiny nuts. Cinquefoils grow wild in most cool and cold regions of the world. Most species are herbs but a few are erect or creeping shrubs

Pontentilla simplex is found mainly in the eastern USA and Canada, while Pontentilla recta is found over almost the entire USA and all of Canada.

I was able to find only one reference to Cinquefoil being edible, it stated that the leaves and young shoots may be consumed cooked or as salads.  I have not found any of this yet so I have not tried it but it is also high in Tannins which are astringent and can be bitter.

Cinquefoil is known for its high tannin content.  Tea made from the roots was used in folk medicine and known for its antiseptic, tonic, astringent, antispasmodic and anti-hemorrhagic properties.  It was used for the treatment of wounds, bleeding and skin eruptions.   The tea was also used in treating dysentery and other more serious internal diseases.  Both the roots and leaves were used to treat inflammation of the digestive tract, especially when there was bleeding and severe diarrhea.

A root decoction has been used in anti-wrinkle cream, and a wash of the plant has been used to reduce skin redness, freckles, and sunburn.   The fresh plant relieves pain when applied to sore areas.  The powdered root can be used as an astringent for mouth sores and when taken with honey, it relieves sore throats, coughs, and fever.   The Cherokee use the root of this plant to make a tea for rashes, fevers, diarrhea, and heavy menstruation.  The leaves can be steeped using two teaspoons per cup of water for twenty minutes, or one ounce of the root can be simmered in one and a half cups of water to make a tea.  Take 20 to 40 drops of tincture as a dosage,  the tea can be swished in the mouth and spit out for thrush and then drink ½ cup of the tea after rinsing the mouth.  For internal issues take 1 cup of the tea every 4 hours.

The five pointed leaves of this plant are said to represent Love, Money, Health, Power and Wisdom.  It is said if you carry a leaf with you this things will be granted, also the herb can be used in any magical working for one of these five things.

A small bag of the herb placed under your bed or some of the herb suspended from the bed will ensure restful sleep and prophetic dreams and can be used for dream questing.  It is also used in some of the ointments used for astral projection.

It is often carried during court cases as it brings eloquence when asking favors of officials and usually ensures that they are granted.  Also carried in a red flannel bag to control anyone.  It is said to provide protection, hang cinquefoil over your door to protect your home.  Alternetly you can prick a hole in an egg, drain it and fill it with cinquefoil.  Tape the egg shut and your home and property are protected (this is kept somewhere on the property similar to a witch’s bottle).

Gather a perfect five-fingered leaf during the waxing of the moon at midnight on a Wednesday night and press it in a book. It will provide protection for any traveler.

Cinquefoil is added to love potions and used in divination spells. Found with seven leaflets, it may be placed under the pillow to dream of your future love or mate. Cinquefoil may also be made into an incense to dream of one’s future mate.

Bathing the forehead and hands nine times in an infusion is said to wash away hexes and curses as will adding it to your bath once every seven days.

While it was said to be used in hexes, cinquefoil was also thought that witches feared this herb. To curse enemy, make a male or female wax doll. Burn cinquefoil to ashes and mix it with a handful of soot, your enemy’s hair and nail clippings and wine. Baste the doll and each time you baste, say:

I burn thee as I curse thee,

I curse thee as I burn thee.

Your enemy should be overcome with sickness and despair before the next waning of the moon.