A current focus of my studies has been upon been upon Tripura Devi (Goddess of the Three Worlds), and in particular Her as Sundari, also known as Lalita whose Sri Yantra is most renown. However, She is not single-faceted as a "high"form of Parvathi (or Lakshmi in some lines), but rather is triune in form. Her forms are Bala, Sundari and Bhairavi; as an interesting correlation to modern paganism, Her forms are maiden, mother and, if you consider post-menses the definition of crone, well, you have that, too. It should be noted that their most auspicious days of worship are waxing, full and the waning moons.

I mention the amazing correlation not only as a point of interest, but also in display of how Devi.has manifested across many cultures and, in cases like this, without changing that much in the schema. Moreover, I would like this oppurtunity to give you all a brief introduction to Her in these three forms. 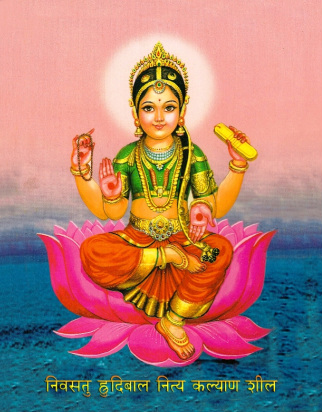 Bala simply means "girl", but fundamentally applies to an unmarried (as in never married) female. Bala is often pictured as a nine-year old female, sitting upon the lotus in mudras granting increase and dispelling fear, holding a mala and sacred scriptures. Although young in imagery, some of Her names bring Her through adolescence and Her sahasranama (1000 Names) displays Devi in one of Her most erotic forms. She can be approached by most easily and She is said to bring increase quickly. Although very sweet, jovial and "child-like", Her power should not be considered small. In two texts, the Lalitopakhyana and Lalita Rahasya, She single-handedly destroyed 30 asuras and, according to the Lalitopakhyana, it was with her laugh. Short of an occasional reference or Her mode of worship, there is not a lot of information otherwise available about Her. 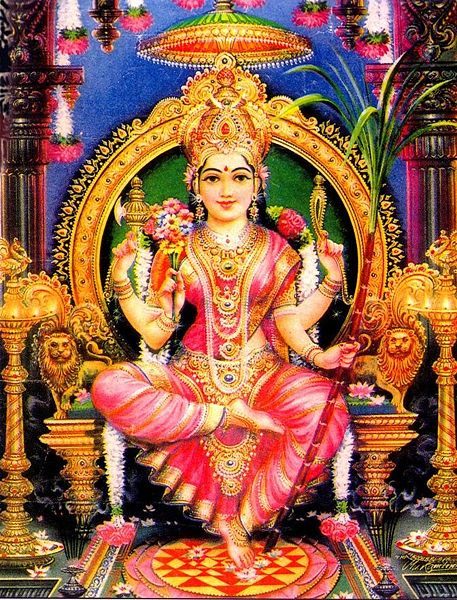 Also known as Lalita (She who Plays) or Shodashi, this is Devi in Her highest expression among the Srikula system of tantra. Foremost among the mahavidya in the line, Her story of immanent form arises after Kali/Parvathi was upset at Shiva for being teased, whereupon She left into the Himilayas to be alone. Shiva, missing Her, sent many after Her to encourage Devi to return. After countless fruitless attempts, the Lord decided to play on a woman's instinctual jealousy (insert chuckle). He sent a sage to warn Her that Shiva was displaying interest in another female! Irritated by His audacity, She assumed the form of another woman to mess with Her Shiva. She approached Him and He knowing it to be Her (but She unaware) was glowing in radiance. A brilliant light beamed from His heart at the sight of Her, from which She revealed Herself in order to give Him a good lashing. She had thought that the light of His love was for the woman that She emulated, but upon learning it was for Her, the mood became that of bliss and the form of Devi illuminated the heart of Shiva became known as Tripura Sundari.

Lalita is a most compassionate form of the Mother. Her foot stands upon Sri Yantra through which She and all other shaktis can be found. As She is Mother of the Worlds, so is the Yantra its blueprint. The full mysteries of Lalita are closely guarded and the tantras iterate that one should give up everything before even thinking about devulging Her secrets. Still, She is not beyond approach for one with pure bhakti. The Khadagamala Stotra and Her Trisanti are methods to bring about the quick boons and compassion of which She lovingly gives.


I'll let someone else speak of this mahavidya, as I can think pf no better words to describe this ugra form of Devi. The following excerpts come from Sivasakti.net:

"Unlike the governing gods of the Hindu pantheon (Brahma, Vishnu, and Shiva) who rule only upon one of these functions, Tripura Bhairavi represents in full harmony two fundamental and apparently contradicting aspects of the manifestation. These aspects refer to the bright beauty and the terrible action in the creation. This perfect correlation of the divine attributes was stated also in the description of the Great Cosmic Power Kali, however the Great Cosmic Power Tripura Bhairavi represents specifically the terrible aspect of the divinity."

Permalink Reply by Jennifer Renee on March 7, 2011 at 18:59
Fascinating! I did not know that Lalita was part a Triple Goddess... Thank you for sharing this...I will be printing this out!