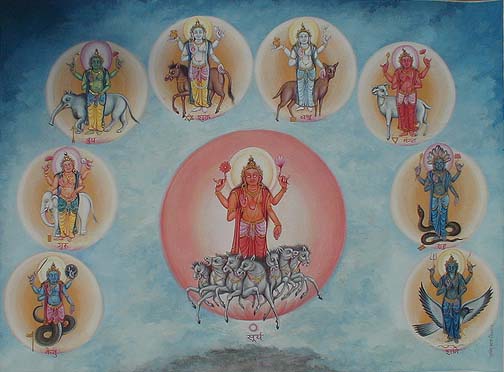 Astrology has an important role within the religions of Sanatana Dharma. Inarguably, it has a more prominent role than any currently existing religions. The Vedic astrology differs quite a bit from the Western one of which most are familar. It comes in a few forms and is heralded as being more precise than the Western variant. It is a bit more thorough, certainly, and takes more elements into account.

Anyway, the purpose of this paper is not really to discuss Vedic astrology, as it would take multiple pages just to serve as an introduction. Neither is it a comparison to the Western school of familiarity, but rather as a focus upon the planets.

Vedic astrology recognizes the seven "traditional" (Chaldean) planets, and upon the same days in Western astrology, plus two more: Rahu, the North lunar node, and Ketu, its South node. Neither Rahu nor Ketu have an allotted day. The rest are, as follows:

The below, coming from astroved.com, is a list of the attributes associated with these planets. Working by their respective times, we understand which power may most suit our needs:


¤The Sun's Hora is auspicious for all political work, dealing with and meeting politicians, leaders and government officials, applying for jobs, court related dealings, for buying and selling, and for adventurous undertakings.

¤The Moon's Hora is auspicious for joining service, to meet elders, for change of place and residence, travelling, to undertake house and property related matters, for meeting the opposite sex and romance, for buying and wearing ornaments, for mediation, for buying and selling of textiles and apparels, all water related works and creative and artistic works.

¤The Mars Hora is auspicious for dealing with land and agriculture related matters, buying and selling of vehicles, electrical and engineering works, adventurous undertakings and sports, for giving and taking loans, for physical exercises and martial arts, and for matters related to brothers and also fire. Avoid quarrels and confrontations.

¤The Hora of Mercury is auspicious for trade and business related matters, for all types of work related to medicines, for learning and teaching, for studying scriptures, astrology, writing, printing and publishing related work for buying or wearing ornaments, all types of accounts work, for telecommunication and computer related matters.

¤The Hora of Saturn is suitable to deal with labor related matters, for oil and iron related businesses, but inauspicious for all other matters.


And whereas there exists even more similarities to Western astrology here, this is pretty much where it ends, too.

Keep in mind that there is no division between the astrology and religion in this system, whereas Western astrology has, in many ways, been secularized. You really don't have to believe in anything as you read your horoscope in the newspaper. Before going on and invoking planets or planning during their hours, you really need to know about the gods that manage their influence. They're not all beneficial and will operate in the hours the same way that you might think. For example, Shani, ruling over Saturn, is much feared as he is the bringer of misfortune as he flies across the sky on his vulture- but he is ever the revealer of truth, which can ever be frightening. Below provides a synopsis of the deific forces behind the navagraha, from http://www.dennisharness.com/vedicplanetarydeities.html :

¤Moon: Chandra is the Vedic name for the Moon. Shakti / Parvati are considered the main female deities associated with the Moon. They are the consorts of Shiva. Parvati is said to remember her previous life as Shiva’s wife, Shakti. Parvati translates as, “she who dwells in the mountains”. Such a goddess is an appropriate mate for Shiva, who also likes to dwell in mountainous regions and the fringe of society. Another name and deity associated with the Moon is Soma. Soma is the divine nectar, the sacrificial elixir of the Gods. Soma is pictured as a priestly sage, a powerful god who is a healer of all diseases and a bestower of riches. He is also the father of Mercury (“Out of the Moon, the mind was born”). Parashara states that the main deity of the Moon is Varuna, God of the cosmic waters.

¤Mercury: Budha is the Vedic name for Mercury reflecting divine intelligence (buddhi). Beyond the mind is intellect (buddhi). According to Parashara, Vishnu is the main male deity associated with Mercury. He is the god of cosmic intelligence, the preserver and pervader of the universe. Saraswati, the goddess of wisdom and learning is the female deity reflecting mercurial powers. Saraswati means “the flowing one”. She is the goddess of creative intelligence, a flowing stream of inspiration like the ancient Sarasvati River which she takes her name from. Saraswati is identified with thought and intellect. “May the Goddess Saraswati, with all power, full of power, further us, as the guide of our minds.” Rig Veda Vol. I. 61.

¤ Venus: Shukra is the Vedic name for Venus. Shukra actually means “semen” representing the power of fertility and reproduction. Lakshmi is the main female deity associated with Venus in Hindu mythology. She is often pictured as the devoted wife or consort of Vishnu. She is the earth, the creation, one with all females, abundance, luxury and pleasure that is healing and revitalizing. She is often depictedsitting on a lotus flower, flanked by two elephants, who are showering her with cosmic waters which represent fertilizing rains. Parashara states that Indrani, Lord Indra’s consort, is the presiding deity of Venus.

¤Mars: Mangal or Kuja are the Vedic names for fiery Mars. The main deity is Subrahmanya or Skanda. He is the adolescent Kumara, the son of Pleiades (Kartikeya), lord of the armies, the spear-holder, the spiritual warrior. According to Parashara, Kartikeya is the chief deity associated with Mars and was Shiva and Parvarti’s second son. In yoga, Skanda is the power of chastity and the virile seed. By making his sublimated seed rise through the central inner channel of the subtle-body (susumna) up to the sixth chakra where it is consumed, that the yogi becomes the complete master of his instincts. He is often depicted riding a peacock and carrying a spear. Rudra, the God of storms, is also mentioned as reflected the Mars archetype of the warrior.

¤Jupiter: Guru is the Vedic name for the great benefic, Jupiter. The primary deity is Brihaspati, the teacher of the Gods, who is known for his divine intellect and speech. He has reached the stage of bliss that is beyond desire. Brihaspati, the god of asceticism and the lord of speech is considered an incarnation of Brahma, the creator. Ganapati or Ganesha is sometimes identified with the Great-Lord, Brahaspati. Ganapati is also considered as a God of Learning and “remover of obstacles”. He is the lord of categories (gana), the patron of letters and schools. Ganesha’s wives are Success (Siddhi) and Prosperity (Rddhi). Parashara also lists Indra as the presiding deity associated with Jupiter.

¤North Node of the Moon: Rahu is considered the dragon’s head or north node of the Moon. Rahu is considered an anti-God and a bitter enemy to the Moon (Chandra). It was Soma, the Moon God that detected Rahu disguised as a god receiving the ambrosia of immortality. Rahu’s head was severed by Vishnu, the preserver; but since it had drank of the divine nectar it had everlasting life. As revenge, Rahu tries to devour the Moon when it is full. This is the tale of the eclipses and why they are vulnerable times on the planet. Durga is considered the main female deity associated with Rahu. She is a fierce warrior, battle queen and personal savior of her devotees.

¤South Node of the Moon: Ketu is the dragon’s tail or south node of the Moon. The deity associated with Ketu is Rudra, the lord of the storms and the causer of tears. Ganesha is sometimes associated with Ketu as the bringer of enlightenment. Ketu is called the moksha karaka planet, the chaya graha (shadow planet) of spiritual liberation. Ketu is also considered a monster that gives birth to comets and meteors. It is also said to have a Mars-like quality, spiritual warrior quality.


I implore one to look further into each of the navagraha before working with them. Speaking of working with them, in Vedic astrology, we're only "star-crossed" or adversely influenced by the planets if we want to be. Instead of just dealing with Mercury retrograde or an inauspicious placement of a planet in your chart, you can do something about it. You can placate the adverse energies by puja and japa of the navagraha, just as you can invoke them for assistance. Below are the mantras for the planets:


This concludes an intro to the navagraha. I hope it is ultimately understood that an importance is given to the planets and how understanding their times and influences can assist in all aspects of our lives.

Permalink Reply by Sangraal on March 16, 2011 at 18:25
Tomorrow, I will find the link to the Vedic astrology site I have used in the past. In Vedic, I am actually Libra...but ruled by that usually shitty Rahu... :( lol BUT, I find it interesting to have Durga associated with It. :)

Permalink Reply by Jennifer Renee on March 16, 2011 at 19:06
Oh I love astrology and will enjoy studying the navagraha....it will be challenge indeed!

Permalink Reply by Jennifer Renee on March 16, 2011 at 19:11
Am...I will most certainly heed your warning...I am very diligent in learning any mantra and take it with the utmost care and seriousness...I would not want to be responsible for any negativity on myself or my teacher!