Hi everyone! I'm happy to be a member of the site & this group. I would like to share with you a story that happened to me a few months ago. I was scouting out a nearby cemetery as a potential ghost hunt spot one day. I also wanted to look at the old headstones as I always admire them. I got to a spot that was about the beginning of the older section when I got this "urge" to look over my right shoulder. As I looked, I noticed an area that was beneath a bunch of trees & was darker than everywhere else. So I decided to go down to it.

As I walked into the area, the first thing I noticed was a ring of large toadstools under a tree. I knew exactly what that meant & as I looked at the headstones I saw that they were all written in Chinese. The headstones were beautiful & some had vines wrapped around them & were carved in naturally-shaped stones that gave the area a Zen-atmosphere. There was also a mystical sense about the spot. I knew I had entered a Fey-Zen space...what a combination. So, I sat down & spent some time there just connecting with the energies & sharing my appreciation.

As I was leaving I realized that a group of hares had been watching me & were sort of following me as I left. Makes you think, "Hmmm?" doesn't it...*smile. I know that the Fey will often come in the form of animals. These could have been just hares attracted to the energy or Fey in disguise but whichever it was, I really felt like I had received a special gift. Now, for the total kicker! Before leaving home that morning I had put some Faerie Drops on my eyelids & asked the Lady to guide me to see any Fey that were near! I had totally forgotten about the drops until I got back home & saw them. 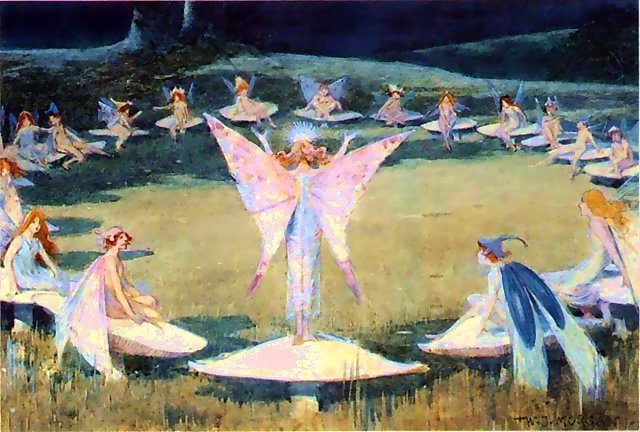 No problem druidking. I'll look thru my stuff & see what I've got. I've also got recipes for Faery Tea & Faery Dust. The Faerie Oil that I used was bought from The Lunar Flame, an online store. I also bought Sidhe Moon Oil from her. I met the owner, Shiro, on another Ning site. You can find her shop on FB.

Very nice experience, thanks for sharing it.   I always try to visit old graveyards when I travel. So many are forgotten as many families move away or die out.

I am on a project collecting formulas for Fae oils, if you would like to share or e-mail me at druidking@cosmicsalamander.com I do understand also if it is secret to you or oathbound.

Oh yes. I always make sure to gift-just in case.

Thanks Forest. I will give it a look. Also our store is on F.B. on-line and in Broward County Florida  "The Cosmic Salamander" Inc.

PP.S. I am sure you have heard the pros and Cons of seeing the Fae without their permissions.

Greetings what a Beautiful story, can I ask you what are Faerie drops? and how can I make them? I make a kind of Faerie dust with powdered rose petals and sparlkes. I really like the sound of the Faerie drops, thank you kindly, Nicole

It sounds amazing to experience such a thing!

I'm sorry for my ignorance, but what exactly is 'Ning'?