Hello, all. Since I sat down to do some conjure work tonight, I figured I'd go ahead and chronicle it. Since conjure rarely has issues with making public magical work you do (unless, you know, you're doing it TO someone), I think it might be interesting to show what I did to fix a hand.

I'll be talking about stuff done to make a toby; if you are lost, try giving this discussion on fixing a hand a read.

Purpose
For those who may not know, I'm a diabetic. In the three or so years since I've been diabetic, it's been under control off and on. Well, I'm sick of my off periods, so I decided to make a toby to help with that.

I want some big-time mojo at work, so I made a seven-ingredient hand for this work.

Preparations
First things first, I decided to light some incense. I like to cense the materials I work with, and then pass them through a candle-flame (or at least the area around the flame with flammables) to cleanse them and prepare them for some work. 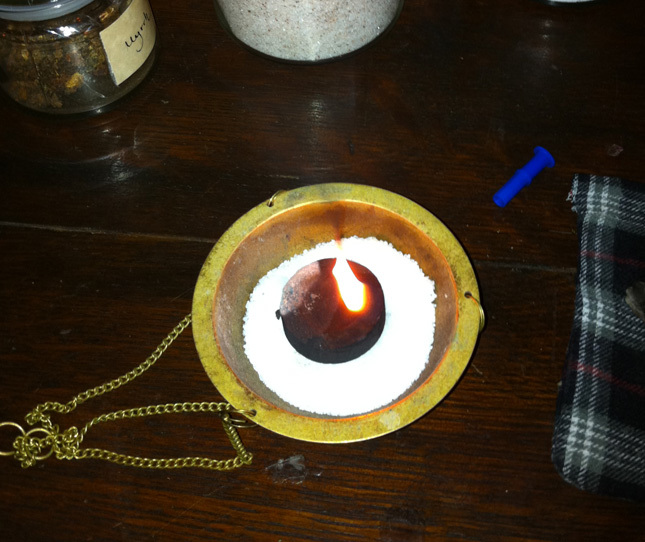 (A little trick for those who have troubles with charcoal disks for incense - take a little clear grain alcohol of as high a grade alcohol as you can find, and let your favorite aromatic herb steep in it for a couple of weeks. Then, when it comes time to light the charcoal, just put a couple of drops of that alcohol on the disc and light it. By the time the alcohol burns off, the charcoal is usually lit.)

Once I got the charcoal lit, I put together a quick purifying and healing incense for our purposes: a little myrrh and a little red amber. 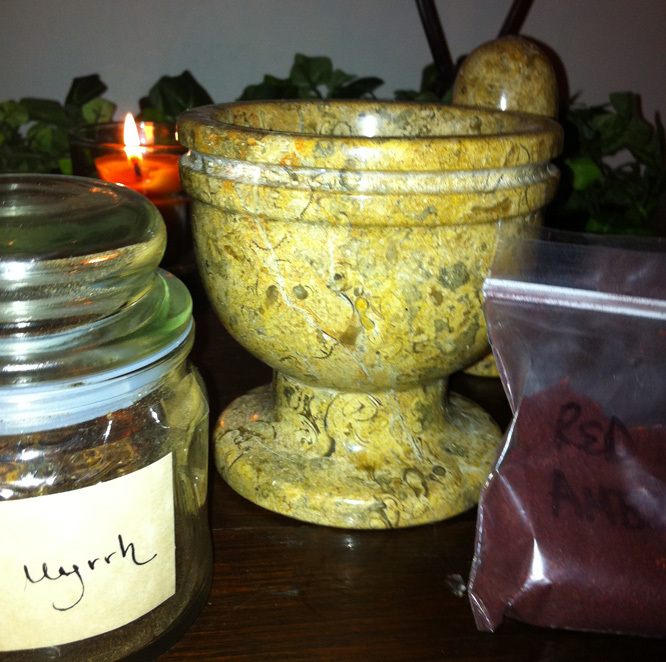 Got that all mixed up well in the mortar, and then applied to the burning charcoal. I then ran the bag through the smoke, cleansing it and purifying it for the work ahead. 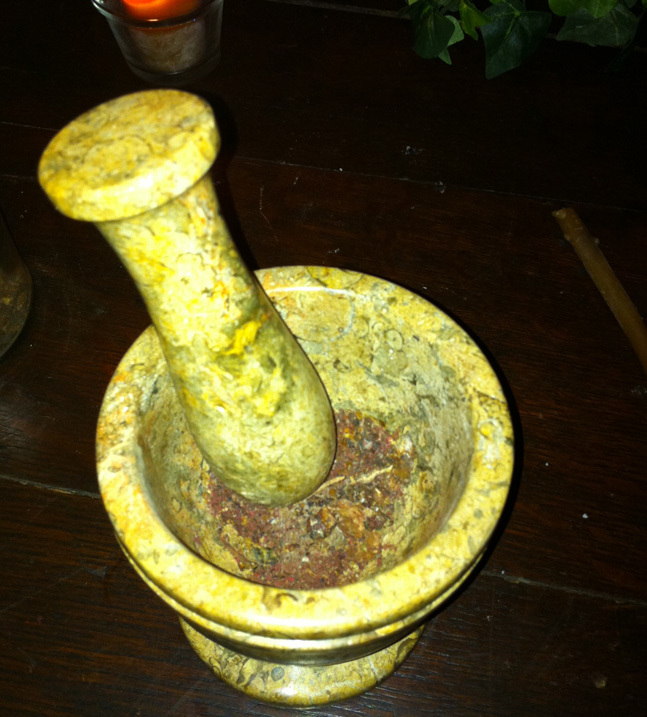 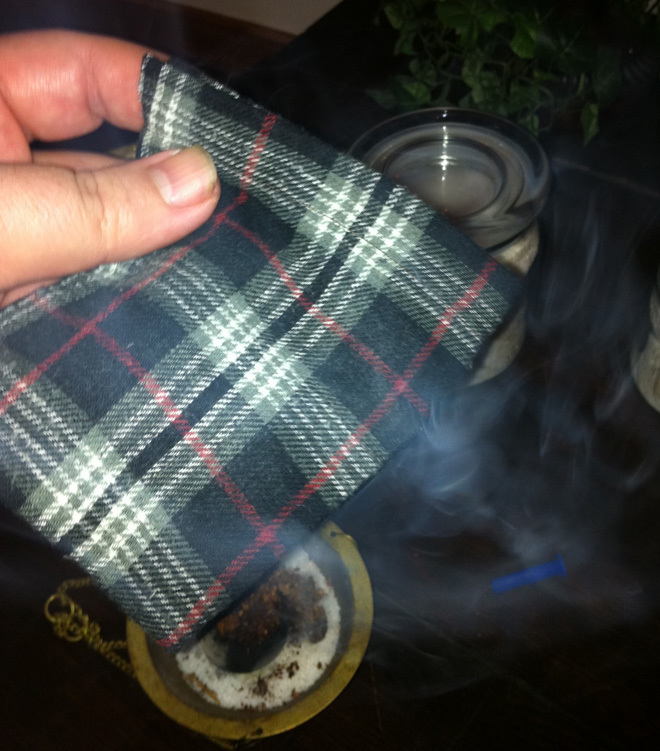 Then, I ran it around the candle flame. The central candle I use is anointed in High John the Conquerer oil, and so is a general "power up" sort of source of flame. I light all my other fires at work from that candle.

(This isn't, it should be noted, something specific to hoodoo, as far as I know. It's just something I did because it felt right.) 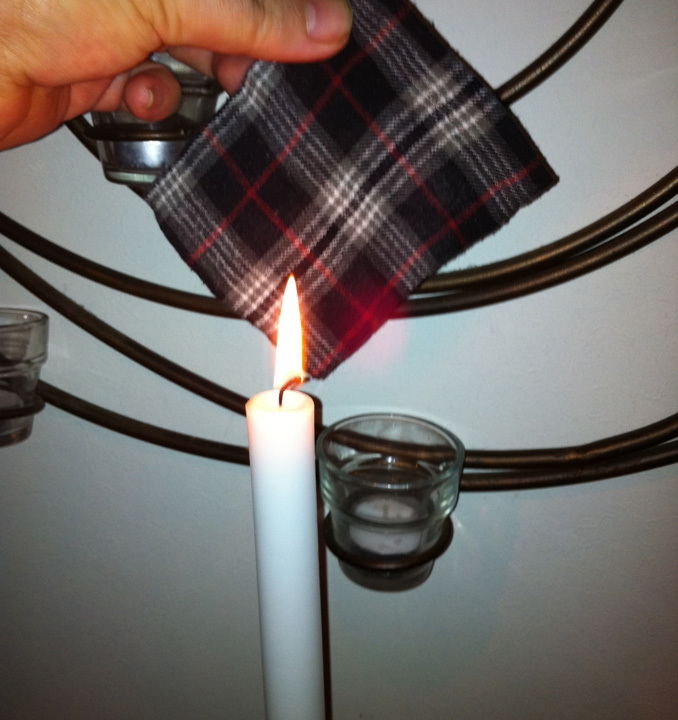 Then, all of that done, I gathered my other ingredients. I used the rest of the myrrh and red amber, so that was two ingredients there. 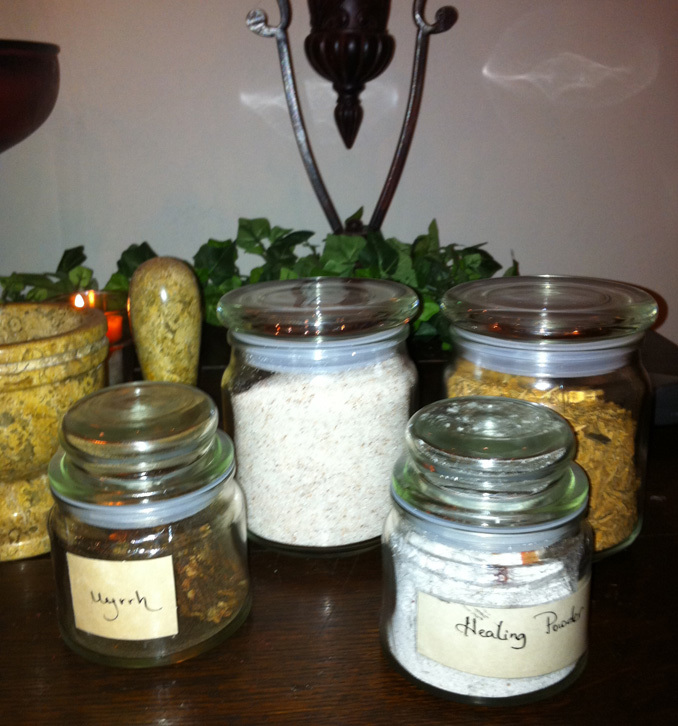 Then, I added a little more myrrh, some salt (because Miss Bev, the rootworker at a local shop, told me to use salt in dealing with the health problems I have, and this is the perfect chance to do so), some cinnamon (which lowers blood sugar) and some of the healing powder I got from Lucky Mojo. That brings my ingredients count to 5. 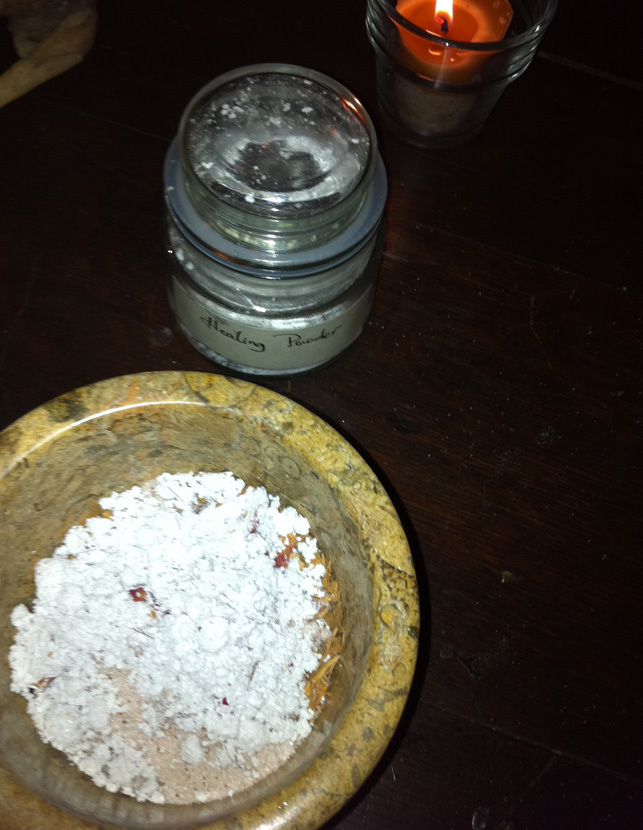 So, I mixed the ingredients all in together, and added my sixth ingredient: some of the Healing Oil I also got from Lucky Mojo. 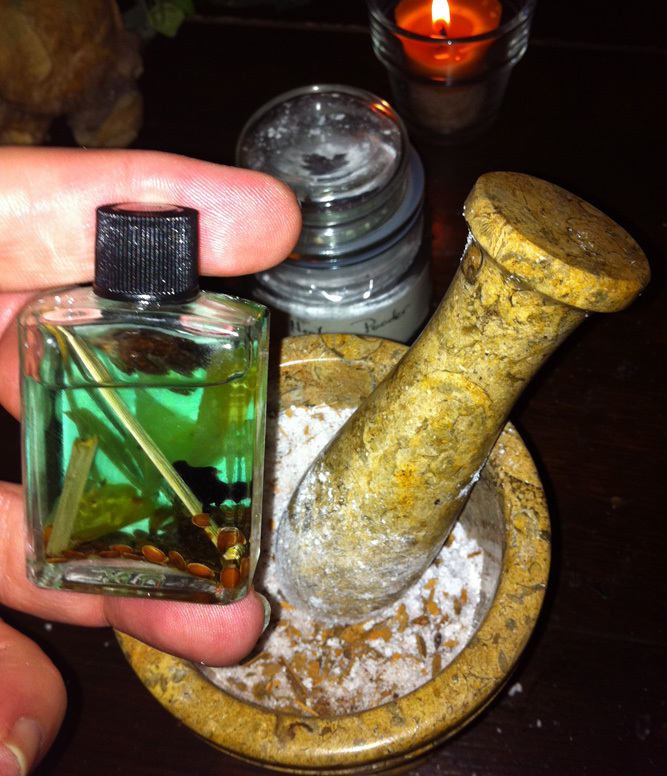 I still need a personal concern, and another ingredient, as you never use even numbers of ingredients in a hand. So, I figured I'd go for broke. Diabetes affects and is tracked by the blood, and blood is pretty high up on the chart for Personal Concerns.

So, using one of my lancets that I use when checking my blood sugar, I added three drops of my blood to the mix. 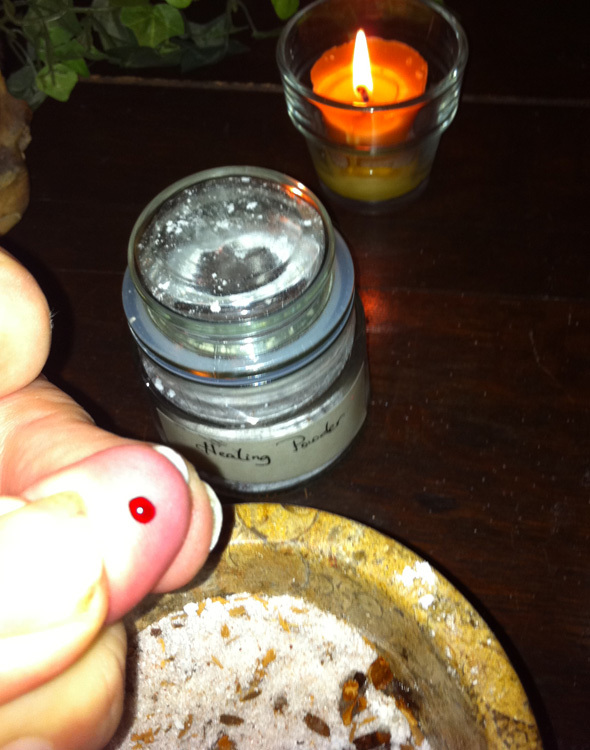 I also touched the outside of the bag with a droplet, to further seal it in. Then, I added the ingredients in the mortar, filling the bag. 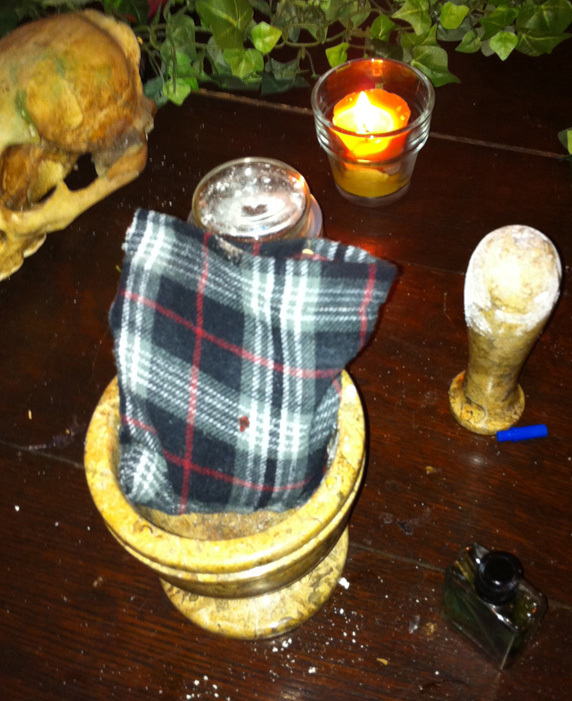 I then censed the whole bag once more, ran it around the candle and then tied the string around it, to bind it all up. 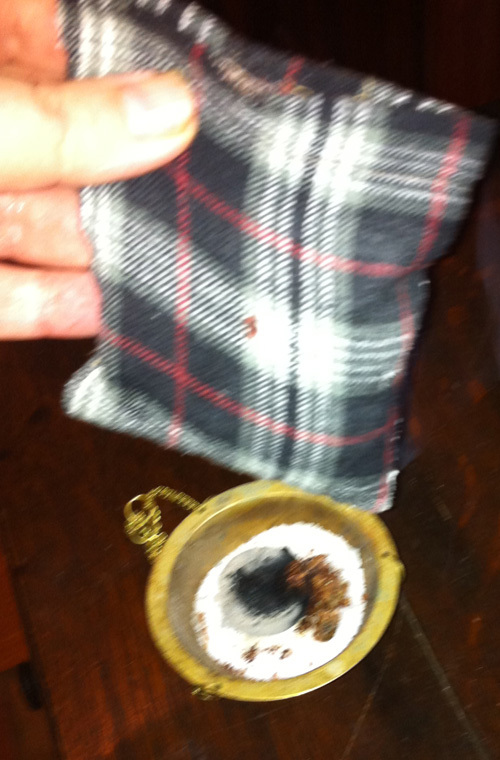 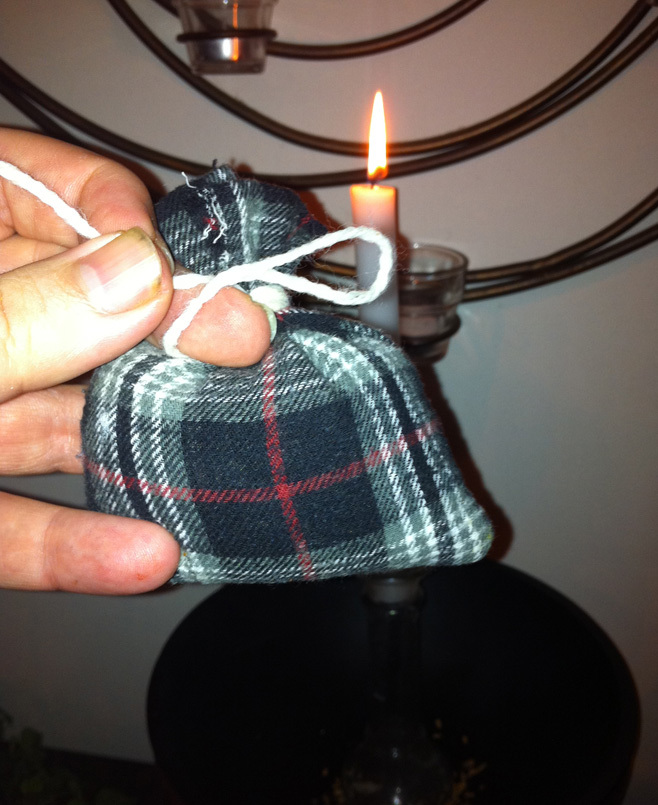 Finally, now that it was "born," I patted it awake, calling its name, then breathed life into it with the three sharp breaths, and then we had a little chat about what I expected of him, as I dressed him in the Healing Oil from earlier.

After that, I set him at the base of my central candle, to let the mojo in him "cook," and to give him a chance to finish waking up and gathering his mojo for the work we're doing together. 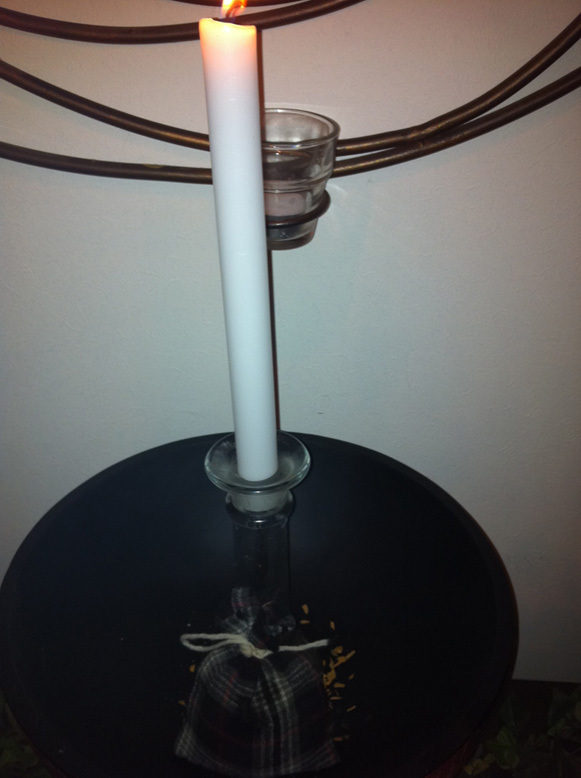 And there he rests for the evening, before beginning his first week of hard work on my behalf!

Permalink Reply by Makoons on December 2, 2010 at 18:44
Thank you thank you! I love that you posted this. This is something I am so interested in and thank you so much for sharing your info on it. I think the curiosity will lead to me practicing :).

Permalink Reply by Sangraal on December 2, 2010 at 19:40
Okay, perhaps this sounds like a total newb question, but I gotta know. Why flannel? Why do mojo bags specifically call for it? Why not muslin? :P

Is it because it was something readily available, a relatively strong material that's fairly inexpensive? Or, is there something else to it?

Argh. Let this be a lesson to all - keep close track of your mojo bags, damn it.

Sadly, Wilford (yes, named for Wilford Brimley, the famed diabeetus and oatmeal spokesman) died last week. I tended to carry him in my pocket, and I got home last week utterly exhausted, so I lay down for a nap. When I got up, I found that my partner had gone through the room to do laundry, including my jeans. He'd taken the stuff out of my pockets, and Wilford was sitting on my bedside table, all dead. :(

Let this be a lesson for all. Alas, poor Wilford, we hardly knew thee.

Ack. Sorry for missing this - I'm not sure how I didn't see this.

As to the question of flannel - I'm not really sure. :D I suspect it's because it stays dry really well, what with all the anointing, and is a thick enough weave to hold in powders and herbs, while still being relatively expensive.

Flannel also has a particular quality to it - it seems to get more dense but also more supple as time goes on, and picks up...something...the essence? I dunno. But it picks something up from the people who wear it. So, in that capacity, it functions well as a Personal Concern, ideally of the person for whom the hand is being made, but most often a link to the root doctor's mojo.

Sorry to hear it, Oak.  I keep mine hidden in a pocket as well, but luckily it's not a "normal" pocket -- you'd really have to look for it and know where :)

Hopefully your next will be longer lived.. It's not even like you can say "don't touch that!" because by the time somoene saw it in a pocket they'd have already killed the hand by accident.