Greetings and blessings everybody. I'm hoping to get some insights, information, and ideas on feather magick.  I've used feathers for smudging for ages (One of my former mentors is a Navajo Medicine Man who remains a good, albeit long distance friend) and I suppose that could be considered feather magick of a sort. But here in the past year or so though, feathers have been coming to me left and right. big feathers, small feathers, long feathers, short feathers, colorful feathers, dull feathers, all sorts of feathers! It seems I can't go more than a few days in which a dropped feather does not draw my attention to itself.

That being said, I know many people feel feather drops should be left alone. Here in the U.S. people tend to think that only bald eagle feathers are prohibited but the Migratory Bird Treaty Act in the U.S. and Canada  "...makes it illegal for anyone to take, possess, import, export, transport, sell, purchase, barter, or offer for sale, or purchase, any migratory bird, or the parts, nests, or eggs of such a bird except under the terms of a valid permit issued pursuant to Federal regulations." (This includes virtually every wild, native bird in north America!)

So I guess part of my question is, what is your take on picking up dropped feathers and using them in magick, but more specifically I'm interested in how they are used. 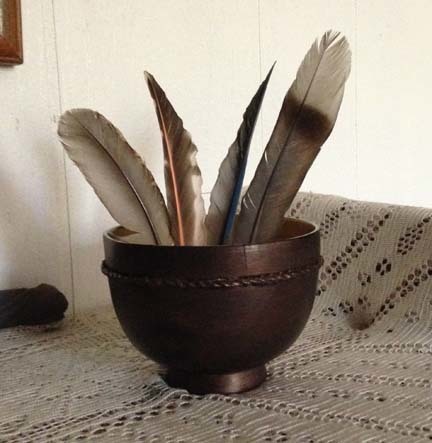 Or it doesn't necessarily have to be your take on picking up and using feathers. It could be "this certain person, who shall remain nameless," that you know. ;-)

That is one of the cutest birds I have ever seen Nephele...I loves the blush on her, so cute!

I turned my singing bowl into a crow bowl...that oughtta be fun craft wise...You outta make a lil' project with your birdie feathers...like a lil' piece of jewelry or decorate a picture frame for a keepsake...wutever you like!

It depends on your relationship with the land, with the bird that has dropped the feathers,  the folklore in your area or attached to your spirituality and the type of magic you practice.

The indigenous people of Australia call their creation story the dreamtime and the flora and fauna are ancestor figures, they are essentially totemic. They use free (dropped) feathers in ceremonies, as amulets, in magic, weave them into sacred baskets and as body art but if that particular bird is your totem it is taboo to touch any part of it. I respect their customs; you cant disregard 50, 000 years of continual occupation of this land.

Even though I am Frynsidu (Anglo-Saxon Heathen) I try to learn the myths that are related to flora and fauna of my adopted country and apply them to my customs, to my understanding of omens and in magic. I use feathers in a variety of ways - as amulets for specific reasons and in incantations.

An Indian craft is this feather blossom...glue the dropped feathers on a circle of felt...this one is juss the beginning of one...they can get very elaborate.

Thanks for those thoughts and ideas Nephele, Mercia, and Ravenheart.