When we least expect them, life is filled with moments, that require a strength that we doubt we even hold. We are called upon to dig deep within and combat feelings that overwhelm us. We are required to face fears, which we didn’t even know, we may have had. We seek counsel from those that we love and often, at these times, I find myself also turning to the Lady, asking for her guidance in making decisions that alone, I feel just are beyond, me. Typically, talking over the issues with her, lead me to solving or directing me on a path toward a solution; yet, at times, I will admit, solutions just do not seem within reach. Over the past several months, one of these issues has continued to grow and I often have found myself unsure how to address them. After careful scrutiny and wise counsel, I knew the start to the solution, would require me to enter into a confrontation, that I honestly had been avoiding for a year plus. I am not at all comfortable with confrontation, so for me, this would lead to a challenge I wondered if I had the strength to carry through with. Upon this realization, I awoke one morning and found the following: 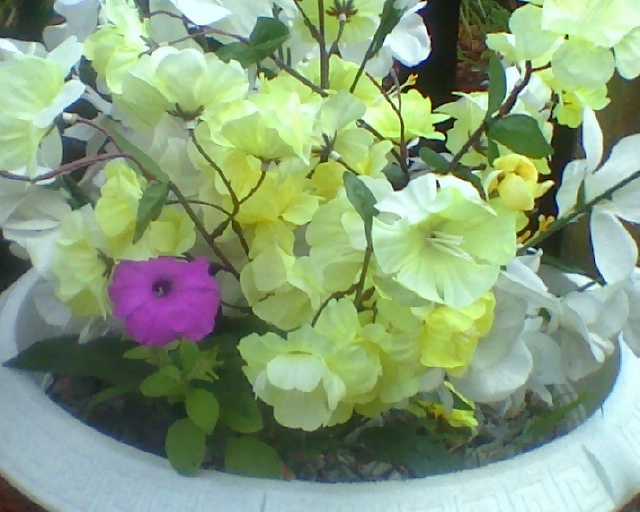 Where did it come from?

How was it able to survive in a pot filled with no soil, which gets no moisture, other than what comes from nature itself?

I wondered all throughout the day just what this single bloom could mean, why had it appeared after I had finally come to the decision, and knew that I was going to be facing a battle. A battle that I had been long avoiding, one in which the repercussions, I knew could be take me to a place deep within myself. For I knew, once started, there would be no turning back. With each day that passed, slightly short on faith in oneself, I have continued to attempt to move forward, to make gains in what has seemed like an endless path leading to nowhere; continually being thwarted, by the one that I had set out to help find answers. The struggles continue, daily the hill continues to become increasingly steeper, and the problem has become to feel as if, I am trying to push water up this incline.

As I feel my strength in this battle begin to give way, I started to notice a change that has amazed me. The single bloom that had found a way to plant itself in nothing more than simple stones, was beginning to also show me something else. That although I may feel the situation was without hope of a solution; I was on the right path, for daily, this tiny plant had been growing. Now, from the rubble within the planter, where once a single bloom had shared its beauty, multiple blooms had burst forth from this same bucket of stones. 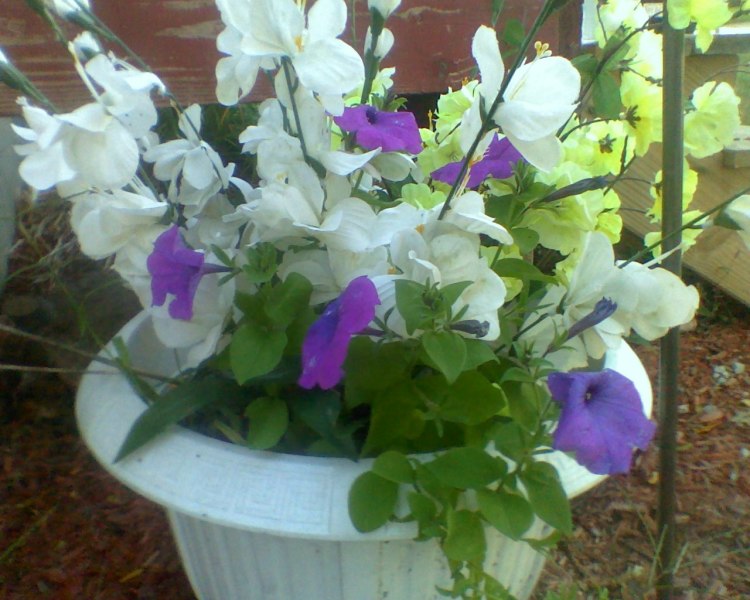 No, I have not achieved the solution to this battle, nor do I feel this battle is far from over, and yes the outcome, may come at a cost that far exceeds what I originally thought, but I know I will need to persevere. It has become apparent to me, that although we at times doubt our own abilities, when we seek guidance from those far wiser than ourselves, often we are shown if the direction and action we have chosen to take are right for us as an individual. All we can hope for, is the best is yet to come.

Permalink Reply by Arimesis on October 11, 2011 at 3:53pm
Ask the Goddess to guide you and She will always show you a path that you will have to walk alone, by choice. The path will not always be easy, sometimes it will be very difficult, but She will never point you to a path that you cannot travel successfully.

Permalink Reply by Ms. Witch(Sara) on October 11, 2011 at 5:50pm
I had a similar situation recently so i relate very much. BB

I have been there myself.. I'll tell about it sometime, however.. have faith and although answers may come when you least expect them, they are there.. they are always there and you will recognize them when you see them.. you have not been abandoned...they road we have been brought to is not easy..nothing in life that is worthwhile comes easy..

Permalink Reply by SullenGirl on Wednesday

This lends beautiful inspiration!  How blessed!

Permalink Reply by Aletria on Wednesday

SullenGirl thank you.. I have been shown kindness and inspiration by some who have come before me and I consider it a pleasure to pass along their truth and wisdom to others.. I was told the road would not be easy.. at the time they were mere words but over the course of time I have come to remember them often.. after all we are all each others teachers and today you are mine..and a see my younger self in MJ..

Permalink Reply by MJ on Thursday
Blessings to all those that have shared on this experience.... Throughout my life, I have been blessed with the guidance of the Lady and those that love me. Often, as we are experiencing their guidance, we don't recognize the unexpected signs that are being shared with us. We miss those signs that are sent to remind us; to let us be aware of the guidance and support we are receiving. At other times, we may see the signs, yet still need time to reflect on what they symbolize, in reference to the difficulties we are going through. The Lady has blessed my life over and over with her wisdom and inspiration.

Permalink Reply by Ron on Thursday
Keep up the battle mom,i have faith in you.